He seemed to be a very happy and cheerful toad and took orders without hesitation.

Kōsuke was predominantly red in colour with blue markings around his eyes and on the top of his head. He also wore a pair of green goggles. On his back, he had the kanji for the word "gold" (金, kin).

Kōsuke was renown for his high speed and his outstanding stamina.[1]

When Naruto Uzumaki goes to Mount Myōboku to train, Kōsuke is left in Konohagakure to become a sort of emissary between the toads and the village. He was placed under the direct command of Tsunade, so that she may contact Naruto if trouble ever arose. When Konohagakure is finally under attack by the Akatsuki members Pain and Konan, Kōsuke attempts to inform Mount Myōboku to call Naruto back. However, before he could do so, he is killed by Danzō Shimura, who wants to keep the toads and Naruto in the dark, so that any possibility of Naruto being captured by Akatsuki is hindered. Despite this, Naruto is eventually informed anyway after Gamatama, Mount Myōboku's name-registration clerk, noticed Kōsuke's name missing from the toad summoning contract. 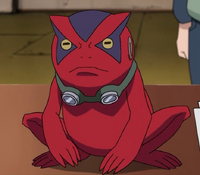