At their first day in the Academy he was seen with one of his friends talking about Sasuke in admiration, saying he's from the Uchiha clan. Also, after the Uchiha Clan Downfall, Kōta told his friend that the entire clan was murdered and that Sasuke is the only survivor.

Kōta is an intensely curious individual and the type who sticks his nose into everything. After seeing Sasuke, he became fascinated at the existence of the Uchiha.

He has short black hair, and big black eyes. He wears a brown long-sleeved shirt. 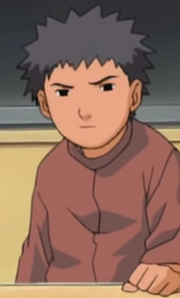