Kaede is a very kind and caring young girl.

Kaede is a young girl with long, teal-coloured hair tied back a few inches above the end in a loose ponytail, large eyes of the same colour, and fair skin. She was shown to wear a kimono-style garment that is pink in colour and held closed with a yellow obi.

Konohamaru liked her a lot, but her father was to be sent on a mission that caused her family to move away from their village to another.

Kaede asks Konohamaru for a red leaf clover, which was said to have the power to grant the user a single wish, which he finally obtains after a lot of trouble alongside Naruto. Interestingly enough, she seems to have liked Konohamaru, as shown as she wanted to see him one last time before she moved. Later, when he gives the crimson clover to her, she kisses him tenderly on the cheek, and departs. 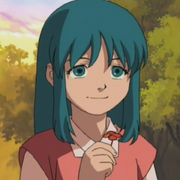