Kagari (篝, Kagari) is a genin from Amegakure.

Kagari has spiky brown hair. He wears the same yellow jumpsuit as his teammates which was stitched up the middle along with a pair of sandals. He also wears a forehead protector that covered his whole head, a rebreather and a sash around his face that obstructed his eyes. In the anime, he was seen in a long-sleeved kimono shirt, pants over a black full body suit, sandals and a pair of glasses that obstructed his eyes.

He is described as stubborn, and is a spendthrift. He, like his teammates, seems to enjoy a fight that is easily won.

Kagari is a fairly competent shinobi with knowledge of techniques across a wide range. He is especially proficient in genjutsu and clone techniques being able to use the Sly Mind Affect Technique which effectively confuses an enemy's sense of direction - wearing out their enemies before attacking them. Kagari also keeps his eyes hidden to sharpen his other senses.[1] In the anime, he also showed the ability to summon one of his teammates through the use of a scroll.

He is also able to use earth release techniques which allowed him to travel and emerge from underground without disrupting the surrounding area. In the anime, it was also shown that he is able to create clones from water as well as create flammable oil.

In the anime, Kagari and his teammates, under the leadership of Aoi Rokushō, where assigned by Amegakure to help the Wagarashi family win the Todoroki shrine race held in the Land of Tea. While Oboro went to stall Idate Morino, Mubi and Kagari prepped a ship for naval combat. After sinking Idate's ship, the Ame genin went to battle Team 7 underwater, where they held the advantage. However, Naruto used his Rasengan training to hand them another humiliating defeat as the first part of the Rasengan training created a whirlpool that sucked Oboro's team into a trench. They were immobilised afterwards as they did not return, but they are assumed to have survived because of their masks.

Kagari is a playable character in the following video games: 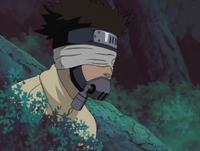