Kajika (カジカ, Kajika) was a missing-nin from Kirigakure who appeared in Naruto: The Cross Roads.

Kajika was formerly a shinobi of Kirigakure. After leaving the village and becoming a missing-nin, Kajika became acquainted with Orochimaru and Otogakure.

Kajika was very loyal to "Lord" Orochimaru, stating that he "wanted to be useful to someone he respected" and referring to Orochimaru as "the Wonderful One". He was also very cruel and seemingly relished combat, licking his lips when he fought Sasuke.

He had short black hair which was concealed by a grey shark-like top complete with a hood which resembled a shark's head, with an appendage on the back that resembled a dorsal fin and dark pants. He also had two dark violet markings under his green eyes. At the edges of his mouth, Kajika had two upward curving lines, reminiscent of a Glasgow smile. Additionally, his fingernails were very long.

Kajika was shown to be a strong opponent. He was shown to be very deductive, capable of calling Naruto and Sasuke's bluff when they posed as his comrades almost immediately.

Kajika was both strong and fast, to the point that even Sasuke's Sharingan could not keep up with him. It was shown that he was capable of leaving large craters in the earth when he struck it. He was also able to knock his opponents a great distance away, and through rock, with a single strike. Kajika was shown to be able to swim very fast, skilfully dodging income attacks. When his vision was obscured by smoke bombs, Kajika was able to use instinct to dodge sneak attacks and kunai used against him.

Kajika was shown to excel at Water Release nature transformation, using advanced techniques effortlessly, within a minimum amount of time, and with destructive power. His skill with a water clone was enough to easily fend off Sasuke, while he was fighting Naruto himself. He was capable of dissolving one of his clones, and use the remaining water to turn into countless amounts of large ice darts or water tendrils. Kajika also showed the ability to make a platform of water for him to stand on. As further testament to his mastery, Kajika was also able to form the Water Release: Water Dragon Bullet Technique, with only one hand seal, showing excellent chakra control. It was also powerful enough to send his opponent through solid rock and shatter their bones. His most remarkable technique however was his ability to fire large jets of water, pressurised to the point of looking quasi-solid, that can easily shatter rock with his Water Release: Cold Sky Water Attack.

Kajika and his group attacked Naruto Uzumaki, Sakura Haruno and Sasuke Uchiha while they were waiting for Kakashi Hatake to finish his reconnaissance for the missing man Genmai who was kidnapped to lure Team 7 and mostly Sasuke. He kidnapped Sakura and took her to his lair while his team-mates fought Naruto and Sasuke. Kajika's team-mates returned only they're Naruto and Sasuke in disguise and he fought against the two. He revealed to Sasuke that his "Lord" sent him and his group to test Sasuke's strength. After some planning, Sasuke trapped Kajika in some wires and Naruto and his shadow clones defeat the trapped Kajika. While trying to break free and attack Sasuke, Kajika became possessed by Orochimaru. After his short talk with Sasuke, Orochimaru released his control of Kajika and his body exploded, resulting in his death. 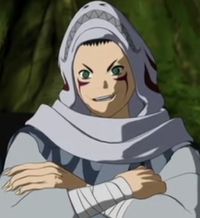