The newly-formed Team 7 is given the jōnin instructor, Kakashi Hatake. To help them get to know each other, they all share something about themselves; Naruto wants to be Hokage; Sasuke wants to kill a certain someone; Sakura blushes before revealing that she likes Sasuke, but openly states she hates Naruto; Kakashi, despite it being his idea, refuses to tell them anything about himself, instead suggesting that they are all hopeless.

Before they can officially be made genin and thus ninja, Team 7 must take part in a survival test. Kakashi advises they do not eat beforehand and gives them until the next day to prepare. He then shows up late. Team 7 is tasked with getting one of the two bells he keeps on his person. Whichever two members get a bell will get lunch and be made into a genin while the third is sent back to the Academy with an empty stomach. Determined to take a bell for himself, Naruto attacks Kakashi. He is easily stopped, by Kakashi. Kakashi suggests that they may have potential after all. 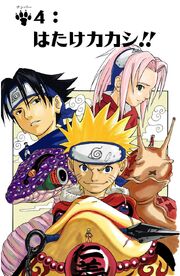