Kakashi vs. Itachi!! (カカシVSイタチ!!, Kakashi Bāsasu Itachi!!) is volume 29 of the Naruto manga.

Using the poison removed from Kankurō's body, Sakura makes three antidotes for Sasori's poison, one of which she gives to Kankurō to neutralise any poison still in his system. Conscious again, Kankurō gives Team 7 a piece of Sasori's clothing he obtained during their battle to help them find Gaara's location. Before they leave, Kankurō pleads for Naruto to save his brother. Although Temari is originally to escort Team 7, Chiyo volunteers to go instead, wishing to see Sasori, her grandson. Elsewhere, Sasori and Deidara arrive at an Akatsuki base with Gaara. They meet with their leader, who convenes the other members to extract Shukaku from Gaara's body.

Akatsuki begins removing Shukaku from Gaara's body, a process that will take three days of intense concentration. Team 7 determines that Gaara has been taken to the Land of Rivers. Since Team Guy is closest to that location, Pakkun is sent to guide them. Zetsu sees Team Guy approaching and informs the rest of Akatsuki. Kisame, having a score to settle with Guy, volunteers to stop them. He attacks Team Guy, but is disappointed to find that Guy doesn't remember him.

Kisame spits a large volume of water from his mouth, converting the desert around them into a lake. He attacks Guy, but the rest of Team Guy protects him. Meanwhile, Team 7 heads towards the Akatsuki base where Gaara is being held. Sakura asks about Akatsuki's reasons for pursuing Naruto and Gaara, which Chiyo explains to be to gain the nine tailed beasts. Zetsu sees them and tells the rest of Akatsuki. Just as Kisame was sent to deal with Team Guy, Itachi is sent to stop Team 7.

Knowing how skilled with genjutsu Itachi is, Kakashi warns Team 7 not to make eye contact with him. Chiyo points out that they are superior in numbers, but Kakashi explains that they cannot compete with Itachi's Mangekyō Sharingan. He then asks how much Itachi's eyes have deteriorated, surprising Itachi. Team 7 prepares for a joint assault. Meanwhile, Team Guy continues to fight Kisame. In order to focus his attention on Guy, Kisame catches the rest of the team in a prison of water.

Naruto attacks Itachi but finds that, despite his attempts to avoid it, he has been caught in a genjutsu. Elsewhere, Guy must fight Kisame alone, the rest of Team Guy having been captured. After Kisame attacks him, Guy realises that he must be serious with the battle. He opens the sixth of the Eight Gates and assaults Kisame with his Morning Peacock. Neji manages to free himself and his team just in time to see Kisame's defeat. Afterwards they examine the body but are confused by what they find.

Naruto is stuck in Itachi's genjutsu. He tries to free himself by using the Genjutsu Cancel taught to him by Jiraiya, but Itachi neutralises the attempt. He torments Naruto with visions of Sasuke, Sakura, and Gaara and his inability to help any of them. Sakura and Chiyo are able to release him. Kakashi asks for Naruto's help in fighting the actual Itachi.

Itachi attacks Team 7 with his Fire Release: Great Fireball Technique. They manage to avoid the attack and Kakashi engages Itachi. Itachi tries to catch him in a genjutsu but finds that it is only a shadow clone. Having created an opening, Kakashi instructs Naruto to attack. Naruto then strikes Itachi with his Big Ball Rasengan. When looking at the dead body, they discover that it was only a body double used remotely by Itachi, just as Kisame had done in his fight with Team Guy. Team 7 and Team Guy continue on to the Akatsuki lair, Akatsuki having bought the necessary time to continue Shukaku's removal from Gaara's body.

Out of curiosity Sakura questions Chiyo about jinchūriki, individuals that have had a tailed beast sealed within them. Experiments intended to help in controlling the power of their tailed beast, jinchūriki have access to great power, power that interests Akatsuki. Sakura asks what will happen to Gaara or any other jinchūriki that has had its tailed beast removed. Chiyo says they will die. Sakura worries about Naruto, but he says there is no need. They continue towards Akatsuki's base. Akatsuki, meanwhile, finishes extracting Shukaku from Gaara's body. At that same moment Team Guy arrives outside.

Team Guy tries to break into the Akatsuki lair, alerting Akatsuki to their presence. Elsewhere, knowing they are running out of time to save Gaara, Naruto picks up the speed. Chiyo asks Kakashi why Naruto is so committed to saving Gaara. Just as Gaara is the jinchūriki of Shukaku, Naruto is the jinchūriki of the Nine-Tails, a similarity that transcends the fact they are from rival villages. Touched, Chiyo reveals that she was the one who sealed Shukaku into Gaara's body, and wonders if perhaps ruining Gaara's life to give Sunagakure a weapon was a mistake. Team 7 joins up with Team Guy. 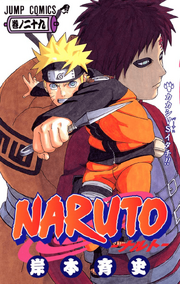