Kakeru Tsuki (ツキカケル, Tsuki Kakeru) was the father of Michiru and the grandfather of Hikaru Tsuki.

Kakeru was the benevolent king of the Land of the Moon. His minister and friend, Shabadaba, showed greedy desire to take over as king, to which Kakeru saw but hoped that Shabadaba would one day understand the his noble vision of selflessness and generosity. As time went on, however, Shabadaba showed no improvement, and eventually, Kakeru accepted the advice of his soldiers and decided to deal with the corrupt minister. He sent his son and grandson overseas to protect them from the ensuing conflict.

At the time, Kakeru had also planned to using country's funds and reducing taxes to help the less fortunate, which did not stand well with Shabadaba. All of this led to the minister to betray the king, hiring the Wandering Ninja Clan to assassinate him; the lower half of Kakeru's body was petrified by Ishidate as he and soldiers loyal to him were escaping from the overwhelming coup d'état; the majority of soldiers and the entire cabinet of ministers has sided with Shabadaba during the revolt.

Kakeru was a benevolent sovereign, caring for the well-being of his people and wanted to use the kingdom's resources to help them to his fullest. He was also perceptive to know Shabadaba's ambitions, but was faithful to hope that he would one day see the error of his ways and change. However, Kakeru's faith was limited, as he would eventually accept his soldiers' advice to terminate Shabadaba's increasingly greediness.

Kakeru had long unkempt white hair which forms into a beard and the top part of his head was balding.

When Korega brought Michiru and Hikaru to where the king was resting, Kakeru's health deteriorated greatly. Sakura Haruno was able to keep him alive a little longer but could not save him as he was petrified for too long, and he used his last seconds to tell his son and grandson that from that moment on, they were the new king and prince. 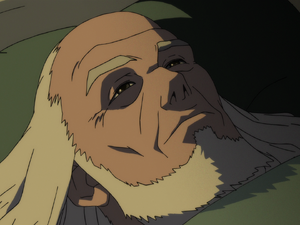