The Kamizuru Clan (上水流一族, Kamizuru Ichizoku) was a clan of bee users from Iwagakure who were once very well-known and revered. Suzumebachi claims that the First Tsuchikage was a member of the clan.

Years before the start of the series, they led an attempted invasion by Iwa of Konohagakure, only to be repelled and largely killed by Konoha's more experienced Aburame clan. The Kamizuru were so badly defeated that they lost their status and respect in Iwa and their numbers began to dwindle.

Years later, the last surviving Kamizuru try to restore their former status by locating the First Tsuchikage's secret scroll, which is full of forbidden techniques for bug user ninja. To that end, they set out to find the bikōchū. Konoha's Bikōchū Search Team were also looking for the bikōchū, and thus the two eventually battled. All three of the Kamizuru were defeated by Hinata Hyūga using her recently perfected Protecting Eight Trigrams Sixty-Four Palms technique. Suzumebachi attempted one last-ditch attack with a summoned Giant Bee, but was defeated by Naruto's Rasengan. 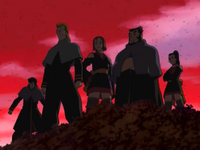