Sometime after Pain killed Hanzō, Kandachi and a group of Ame ninja fled the country and went into hiding by taking over a village surrounded by a magnetic force that affects a person's chakra flow to the brain similar to genjutsu. Sukune interfered with Kandachi's takeover and resulted in his brutal murder by his summon, the Conch King. He held the women and children hostage and threatened if word of their hiding was leaked outside the village, the hostages would be killed.

Kandachi was overconfident in his abilities. He thought that even a Sannin like Jiraiya was no match for him. He was also very cruel.

As the right hand of Hanzō, he was quite a skilled shinobi.

Like his superior, Kandachi fights mainly using the Summoning Technique, commanding his personal summon: the Conch King with hand seals. Through this he could give the Conch King a signal to use specified techniques or to move. Kandachi has also shown capable of using Water Release enabling him to hide in water and cast genjutsu on his opponent through the Conch King. The magnetic field caused by the tree strengthens this genjutsu, as the magnetism disrupts a person's chakra flow, similar to genjutsu.

When Jiraiya brought Naruto Uzumaki to the forest for training, they encounter Tanishi who tells them of Kandachi's takeover. Naruto (disguised as Tanishi) and Jiraiya, pretending to be captured, meet with Kandachi, surprised to see Jiraiya again. Naruto's cover is blown when the real Tanishi arrives and Kandashi decides to feed the villagers to the Conch King. Naruto fights against Kandachi and the Conch King but their techniques knock Naruto down every time. In the end, Naruto defeats them both with his first Big Ball Rasengan. 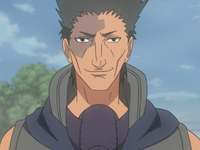