View source
watch 01:13
Naruto Lore: Kara
Do you like this video?
Play Sound

Kara (, Viz: The Husk, literally meaning: "Shell" or "Husk") is a secret society[1] formerly led by Isshiki Ōtsutsuki, and later by Code.

The group is made up of "Inners" (, Innā) and "Outers" (, Autō), with each of the Inners being in charge of a particular region. Each Inner appears to bear a facial tattoo of a Roman numeral and wears a black hooded cloak with coloured lining, fastened at the right shoulder with a metal pin; all Inners are regarded as completely monstrous in power.[2] The Inners are the backbone of the organisation, as if everyone of them are out of commission, the Outers would effectively cease to function, and Kara would come to an end.[3]

Outers are individuals who support Kara's ideology from the outside and complete missions requested by the Inners, acting as conspirators, sleeper agents, and spies. Members include politicians and merchants, some of whom actively work to undermine the rule of the Daimyō and Kage.[4] Outers are also partly responsible for the widespread development and proliferation of Scientific Ninja Tools; as the Outers include engineers and scientists from various villages, they are able to significantly develop and improve the tools before bringing them back to Kara, leading to them possessing the latest in technology and engineering.[1] Regardless of their loyalty, Outers are easily expendable for the organisation.[5]

The secret society has accumulated a great deal of wealth and political influence, makes use of Scientific Ninja Tools, and communicates over long range via genjutsu.

When Isshiki Ōtsutsuki came to earth over one thousand years ago to cultivate a chakra fruit, he was betrayed by his subordinate partner, Kaguya, who injured him to the point of near death. Desperately clinging to life, Isshiki parasitically invaded Jigen, a monk who happened to be nearby.

Using Jigen as a host body, Isshiki went onto to found the secret society, Kara as its leader, which recruited a group of people — the Inners — to assist him in cultivating a new God Tree to collect its chakra fruit,[6] under the promise that their personal wishes would be fulfilled.[7][8] Amado, the chief scientist of the organisation, modified every member with advanced Shinobi-Ware that they had an unwitting Katasuke Tōno deliver to them.

Due to losing Kaguya, Isshiki intended to feed himself to the Ten-Tails to have it bloom into the God Tree, as there were no other Ōtsutsuki to sacrifice. However, with his body being so critically and irreparably damaged by Kaguya and his current vessel of Jigen being incompatible with the Kāma, this would produce an inferior Chakra Fruit.[9] To circumvent this, Isshiki began preparing a new vessel for his Kāma to properly continue his survival, having purchased fifteen orphaned children to carry out his experiments to ensure his next body would be suitable for a full lifetime, with Kawaki being the result. Delta noted that Isshiki's investment in preparing his vessel was enough to buy an entire country. Kawaki's development, along with the God Tree's cultivation, became factors that had Kara pressed for time in their goals.[10] Code, being one of the fourteen children to be deemed a failure and the only one of those to survive, was left with a White Kāma instead, which does not have the capacity of reviving Isshiki, and was then recruited into Kara as an Inner, and Isshiki's most loyal subordinate. In the anime, Kara took advantage of Amegakure's mostly abandoned state to run such earlier experiments in one of their hidden facilities there; although they have long since abandoned the facility, it remained intact until Sasuke Uchiha and Sai Yamanaka investigated, causing the Outer Garashi Tōno to trigger a self-destruction mechanism. When Jigen questioned why the place was not destroyed long ago, he gave Victor a look of suspicion, who frowned in return, before brushing it off as nothing incriminating in the long run.[5]

However, when Boruto Uzumaki became the vessel for Momoshiki Ōtsutsuki, the time limit was greatly alleviated.[10] Kara, therefore, shifted their plans to feeding Boruto to the beast instead, as his healthier and stronger body along with being compatible with the Kāma would result in a more potent Chakra Fruit.[9] Furthermore, Boruto's contact with Kawaki had led to both of their Kāma to decompress more rapidly than expected due to their resonance, a development that Isshiki found favourable.

In the anime, the Inners Victor and Deepa plotted to use Kara's resources for their own unauthorised project in recreating a God Tree via a splinter that Victor retrieved from the Fourth Shinobi World War, as opposed to helping Isshiki plant the one that was planned, in order to cultivate a Chakra fruit of their own. Victor desired this fruit early to ensure he would not die from his waning lifespan, while Deepa wanted to simply taste it. Deepa acknowledged that neither were trusted by the rest of Kara, and that Victor only became an Inner via a huge investment made by his company. Their plan ultimately failed, as the imitation of the God Tree could not produce a fruit, and Victor plotted to take Kawaki for himself to extend his own life afterwards. Isshiki did not trust Victor, and after learning the truth from a temporarily revived Deepa, tasked Koji Kashin to execute the traitor. Isshiki also ordered Amado to dispose of Deepa as well, eliminating both Inners at the same time.

Amado, though being Isshiki's right-hand man, had his own motives to conspire against Kara: solely to eliminate the threat of the Ōtsutsuki clan. For that, he created the Inner Koji Kashin, a clone of Jiraiya, to assist him. Both Koji and Amado defected from Kara, secretly assisting Kawaki to escape and forced Isshiki to improperly revive via Jigen's body, so that his short lifespan will expire before he could rebrand Kawaki with Kāma. Throughout his tenure in Kara, Amado created many cyborgs that exceed Jigen in terms of power, in hopes they would be able to kill him, but Jigen ordered them all to be disposed of to prevent usurpation of leadership. Code was the only one to be spared of this fate due to his unwavering devotion to Isshiki, while Ada's artificially endowed power of captivation affected Boro, the Inner ordered to dispose of her, and he hid her and her brother Daemon in one of their bases.

Although Isshiki ultimately died before he could reapply the mark onto Kawaki, the data that was already extracted remained within his body. Momoshiki intended to reverse the roles of Kara's revised plans, to offer Kawaki as a sacrifice to Isshiki's Ten-Tails in order to collect a chakra fruit for himself.

After his demise, Isshiki's spirit temporarily manifested in Code's White Kāma. Isshiki gives Code his final order to take over the Ōtsutsuki Will, by cultivating a God Tree and consuming the chakra fruit, so as to become an Ōtsutsuki himself. In order to achieve that goal, Code locates the hidden establishment of Boro's cult to activate one of the cyborgs that were ordered by Jigen to be deactivated, Ada, that instead was put into stasis. After her awakening, Ada forms a partnership with Code in an effort to exact revenge against Amado and getting a true love with Kawaki or Boruto. As they review their plans, Code notes that he can't fight Naruto and Sasuke at the same time and Ada tells him she only knows simple taijutsu, Code also informs her that as Kawaki is an Ōtsutsuki he could try to kill her, this takes Ada to send Bug to release his younger brother Daemon. After ten days in hiding, Ada used her Senrigan to inform Code that Kawaki had escaped from Konoha. Using his Claw Mark, Code teleported to speak with Kawaki. Code was unable to kidnap Kawaki thanks to the intervention of Boruto, Shikamaru, Naruto and Momoshiki. When Kawaki nearly killed him with his new Kāma, he realised he had no chance against him at the moment and withdrew, planning to have Amado remove his power limiters. Upon returning to the hideout Ada reminded him that he didn't have any Claw Marks in Konoha, but he said he had already taken care of it. 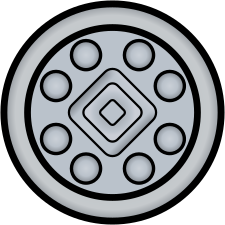