Karin Kagura (神楽かりん, Kagura Karin) is the owner of a ninja weapon shop known as "Emporium Karin" located in Konohagakure.

When her father died of a mysterious illness, he left the store to Karin. She, however, is not able to handle all the jobs herself and is frequently in need of assistance.

Karin is a gloomy and shy girl, only speaking to Naruto whenever she is around him. Despite that, she is also happy and thankful to those who help her out.

When Naruto enters her weapon store, Karin meets the boy, asking him if he were in need of some help. After a brief conversation, the girl asks Naruto to help her save "Emporium Karin". As Naruto wonders how he'll do that, she informs him to get rid of a group of bandits by advertising her shop and giving away a variety of weapons whilst wearing a flyer on his back. Naruto goes out, beats up all the ninja bandits and passes the mission. After this mission, she goes to an abandoned mine called the "Blue Dragon Cave" to get raw materials for making new ninja tools for her shop. Worried, Naruto looks for her and finds her there. She then tells him that she heard a weird scream coming from deep within the cave. Naruto is shocked to hear the word scream come from out of her mouth. She then decides to investigate and winds up surrounded by a pack of ninja who she had never seen before. She somehow manages to leave them believing that she escaped. She, however, informs Naruto that there were two guards who blocked the exit, making it impossible for her to go outside. Lastly, she tells him that there were fishy stuff going on in the cave and insists that he be careful. Naruto then tells her to get out of the cave. Heeding his warning, Karin leaves. Later on, she thanks Naruto for saving her and her business. 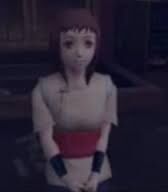