Kasumi (カスミ, Kasumi) is a former academy student of Konohagakure.

She appears during a flashback to Ino Yamanaka and Sakura Haruno's time in the Academy, appearing alongside Ami and Fuki. In the anime, she is also seen in Naruto's flashback during shuriken training.[2]

Kasumi had ginger hair that was done in an afro style with a shuriken-like mark on the front left side of her haircut. She wore a purple dress with mesh underneath and long light pink sleeves along with two sets of belt-like fixtures to it. 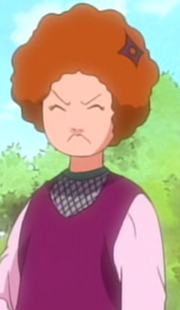