During the war-torn era before the creation of the shinobi villages, Kawarama was one of the many young shinobi who were put on the battlefield to fight. At a young age, he became a shinobi with outstanding talent, but nevertheless became a casualty to the Uchiha and the Hagoromo clan during the ever-waging battles.[1] When the remains of Kawarama's body were retrieved, it was buried alongside other fallen comrades, in a coffin etched with the Senju symbol on it. His brothers Hashirama, Tobirama, and Itama Senju mourned his loss, with Hashirama claiming that Kawarama had died a pointless death and at such a young age. This greatly angered their father Butsuma, who struck Hashirama and told him that Kawarama had died as a true shinobi.[2]

Kawarama was a young boy with a head of light-coloured hair (depicted as light-brown in the anime), and black eyes. He also had an x-shaped scar on his right cheek. He wore a simple attire consisting of a black coloured shirt, and white haori with black trimmings.[3]

Although being merely seven years old, Kawarama managed to become a shinobi with outstanding prowess on the battlefield.[1] 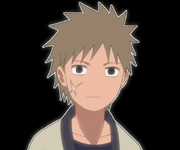