The Ketsuryūgan (血龍眼, literally meaning: Blood Dragon Eye), is a dōjutsu, which appears in certain individuals of the Chinoike clan. The Ketsuryūgan is recognised by its reddish colour, giving a special appearance for the users of this dōjutsu, characterised as holders of "eyes as red as blood". Its power earned it comparison to the Three Great Dōjutsu.

The Ketsuryūgan confers genjutsu casting abilities, either by making physical skin contact with the target or meeting each other's gaze. Upon which, they can hypnotise the victim in a variety of ways, or even delve deep into their minds to extract information. The Ketsuryūgan also gave the users the ability to manipulate iron, or more accurately, any liquid with a high iron concentration. As such, fitting with its moniker, the Ketsuryūgan can manipulate the blood within a living target, whether if be themselves or another being. 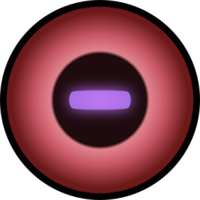