Kin Tsuchi (キン・ツチ, Kin Tsuchi) was a kunoichi from Otogakure and a member of Team Dosu which took part in the Chūnin Exams under orders from Orochimaru to test Sasuke Uchiha's skills.

Like her teammates, Kin appeared to be overconfident in her abilities. She had a strong dislike towards Sakura due to her apparent vanity for her hair and criticises her for focusing on her appearances rather than training, even going so far to call Sakura a female swine and boy-chaser in the manga. Like her teammate Zaku, she loses focus on her opponent's tactics when overconfident, as seen when she didn't recognise that Shikamaru could use the very thin shadow created by her wire strings against her when she boasted about her abilities. Kin also preferred to toy with her opponents by defeating them slowly and painfully, as stated by her during her fight with Shikamaru in the preliminaries.

Kin had fair skin, black eyes with very long black hair, almost reaching down to the ground, tied by a violet ribbon right near the end. She wore a forehead protector, a pale green vest somewhat similar to a flak jacket, snake patterned pants with a snake patterned skirt over it, and a snake patterned scarf around her neck, much like her teammates: Dosu Kinuta and Zaku Abumi.

Kin focused on the use of senbon as part of her fighting style, which she could throw with great accuracy to strike at her opponent's vital points. She often attached bells to her senbon in order to confuse and distract her opponents with the ringing of the bells. In the anime, she also used a sound-based genjutsu activated by the ringing of the bells.

Team Dosu travelled to Konohagakure to participate in the Chūnin Exams with the goal of killing Sasuke Uchiha. Before the exam started, Kin and her teammates overheard Kabuto Yakushi talking about their village and decided to attack him. After attacking Kabuto, Team Dosu announced to the rest of the Konohagakure genin that they were defiantly going to pass the exam and all become chūnin. To prevent the situation from escalating, the exam proctors, led by Ibiki Morino, appear and settle things down. Afterwards Kin passed the written portion of the Chūnin Exams and moved onto the second phase alongside her teammates. During the second phase of the exam, Dosu initiated the team's real mission of killing Sasuke. After several days in the Forest of Death, Team Dosu finds Sakura alongside her injured teammates. Seeing an opportunity to kill Sasuke, Team Dosu attacked Sakura, activating her traps she had hidden. Easily getting passed the traps, Team Dosu was immediately attacked by Rock Lee.

After a short fight, Dosu defeated Lee, leaving Sakura to fight the Otogakure genin. Soon after Kin manage to immobilise Sakura by grabbing her hair, and in the process, criticise her on putting more effort on her appearance as opposed to her training. After finding confidence in herself, Sakura freed herself by cutting off her long hair with a kunai, leading to Kin to immediately attack her with her senbon but unintentionally attacked a substitution. Soon after, Zaku managed to defeat Sakura, leading to Team 10 to arrive and confront Team Dosu. After the fighting between the two teams broke out, Ino Yamanaka used her Mind Body Switch Technique on Kin and took over her body. With Ino in control of Kin's body, she demanded Team Dosu to hand over their scroll, using Kin's body as leverage. Zaku promptly attacked her, hurting both Kunoichi in the process and knocking Kin out for the remainder of the fight. After Sasuke woke up, he swiftly defeated Zaku leading to Dosu handing his teams scroll over to Team 7 and retreated with his teammates. After Kin and her team recovered, they manage to obtain both scrolls needed to proceed into the finals and passed the second phase of the test.

After deciding to participate in the third stage preliminaries, Team Dosu reunited with Orochimaru, who was disguised as their Otogakure sensei. After watching several fights, she was matched against Shikamaru Nara. Shikamaru initially believed her trick to be a simple combination of needles with and without bells in order to make him less alert of the latter. Kin, however, followed through using her strings to ring a previously thrown bell, further confusing Shikamaru. Shikamaru countered, contracting his shadow and minimising it under the string attached to a needle she threw; she didn't notice that a string at that height would not be able to cast a shadow. Shikamaru then proceeded to use Shadow Imitation Technique to make both of them throw a shuriken simultaneously. Still bound to Shikamaru's shadow, she was forced to mimic his actions and bent backwards to avoid the shuriken but was too close to the stadium's wall and hit her head, knocking her out in the process.

During the Konoha Crush, Orochimaru summoned the First and Second Hokage, leading to the Third to use the Dead Demon Consuming Seal to seal the deceased Hokage. After successfully sealing the two at the cost of his life, it was revealed that Kin, along with Zaku had been used as sacrifices to summon the former Hokage souls.

Kin Tsuchi is a playable character in the following video games: 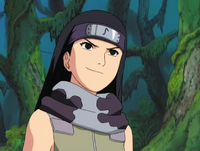