King (キング, Kingu) is a giant gorilla that lives on Genbu. Killer B calls him King-chan (キングちゃん, Kingu-chan), as a sign of affection.

King, like most inhabitants of the island is very large in size towering over the humans there. He is brown in colour with lighter shades of brown fur on his hands, face and chest. He also has green eyes and a prominent scars running down the left side of his body: above his eye, his mouth and along his torso.

King appeared before the Kumo and Konoha ninja when Motoi guides them through the island. As King was about to attack them, Killer B calms him down telling him they're with him and they greet each other by bumping fists. King is later seen with Kintoki and the other bears, watching with interest as Guy opened his Eight Gates.

In the anime, where his role is expanded, King tells Naruto of the three of the most fierce animals on the island that should always be kept apart: Chūji, Don, and Hippo Boss because they were locked in a spat over the affections of one female. Hearing a commotion in the forest, King follows Naruto and Condor to assess the situation. Here, the three beasts are seen fighting each other but are soon quelled by King's appearance on the scene. As soon as King demands that the female they were fighting over be brought here. So that the matter could be settled, Armadiko appears. Shocked and enraged, King declares that Armadiko was his female before Armadiko tells them that she had fallen for Naruto. As translated by Condor, the beasts declared that they were going to beat Naruto to death and commence chasing after him. They are later seen somewhat beaten up and sulking they give Naruto threatening stares as they see Armadiko cosy up to him. Their gazes however, are quickly averted when Naruto asks them if they wanted to fight again.

Later outraged when Naruto declares that he was going to start the ecological survey which required that he see the animals' genitalia in order to know their sexes, King and the others voice their dissent when Naruto states that he wanted to know whether or not Armadiko was female because of the kanji pattern for male on its armour. Soon after this, tremors are felt on the island and the animals are then thrown into the air after the Island Turtle is flipped over. Saved by Yamato's quick thinking, King and the others are shocked when they see that an unconscious Armadiko is actually male. The four are then seen commiserating the revelation. 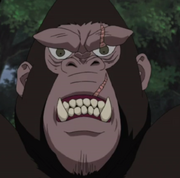