Kinkaku (金角, Kinkaku) was one of Kumogakure's infamous Gold and Silver Brothers, and a member of the Kinkaku Force.

During the First Raikage's reign, he and Ginkaku were part of a team that was assigned to capture the Nine-Tailed Demon Fox, but the two were swallowed during the confrontation.[2] However, they survived by eating the flesh of the beast, and thrashed inside the tailed beast's stomach for two weeks, eventually forcing the Nine-Tails to regurgitate them. Upon their escape, they both came out looking like miniature versions of the beast, due to having acquired a portion of the fox's chakra.[3]

During a peace treaty ceremony between Konohagakure's Second Hokage and Kumo's Second Raikage, the two brothers staged a coup d'état that left the Hokage on the brink of death.[2] During the First Shinobi World War, the Kinkaku force cornered the Second Hokage and his Escort Unit — an altercation which ended in Kinkaku killing the Hokage. At some point, he met Kakuzu, and he was still alive after the appointment of the Third Raikage.[4] For his crimes, he became one of the most notorious criminals in the history of Kumo.[5]

Kinkaku and his brother are considered disgraces to Kumogakure due to their underhanded natures. They use deceit and betrayal indiscriminately in battle and will even attack their own comrades.[6] He is also very prideful, and became angry when Darui chastised them, proposing to his brother that they decimate their opponent; though he seemed to be more composed than Ginkaku. One of the few things that Kinkaku did seem to care about was his brother's well-being. During their fight with Darui, Ginkaku was sucked into the Benihisago, and in response Kinkaku went into his Version 2 state out of rage.[7]

Kinkaku was a burly shinobi with a muscular build and towering stature. He had light-coloured eyes with dark-coloured sclera,[5] grey-toned skin (depicted as fair-coloured in the anime),[8] as well as long, blond hair with prominent dark tips, arranged in a style reminiscent of a Native American headdress. These features are accentuated by the presence of two distinctive horns that emerge from the abundant hair on his head, as well as a rectangular marking on his nose. He also had whisker-like marks on his face.

His typical attire comprises of a standard Kumogakure flak jacket that is black on the edges and worn over a purple, high-collared, sleeveless uniform. He wore a purple forehead protector and a pair of simple wrist-guards. The kanji for "gold" (金, kin) was tattooed upon the shoulder of his exposed left arm.

The Gold and Silver Brothers were well-known for their prowess, causing a shinobi to tremble in fear when he saw them, and nearly lead the Fourth Raikage to disregard his duties as leader of the Allied Shinobi Forces in order to personally confront the pair. Alongside Ginkaku, he was capable of nearly killing Tobirama, and with the Kinkaku force, managed to kill him. Kinkaku's power alone nearly demolished the entire First Division and inflicted massive casualties.[9] Being a descendant of the Sage of Six Paths,[1] it was believed this allowed him to survive eating Tailed Beast flesh.

The brothers wielded the five Treasured Tools of the Sage of Six Paths, all of which cost a large amount of chakra: enough to kill normal humans before they can utilise the tools properly. Despite this, they were capable of using these weapons regularly and for long periods of time to the point of being considered a weapon specialist. This showed them to have very immense reserves of chakra as their usage the Treasured Tools did not cause any fatal side effects, even before absorbing some of the Nine-Tails' chakra. By combining the Benihisago, Kōkinjō and Shichiseiken, they can capture their opponent's word soul (言霊, kotodama) and body, sealing them away for good. The Bashōsen allows them to create any of the five basic elements.[10]

According to Ao, Kinkaku possesses chakra traces of the Nine-Tails' mixed in due to them being swallowed and regurgitated by the Nine-Tails after surviving two weeks inside its stomach by eating some of its chakra-imbued flesh.[11] Despite not being an actual jinchūriki, his chakra has similar strength and potency to the Nine-Tails', making him a pseudo-jinchūriki.[12] Having eaten so much of Nine-Tails' flesh, Kinkaku is able to shroud himself in a demon cloak at any time and even enter a Version 2 form. In this form, can produce six tails with one tail vastly longer and thicker than the others. He also retains his consciousness, unlike most jinchūriki, who lost to their bestial instincts in this form.[7]

Kinkaku can use his chakra tails to strike with great force and range, block a torrent of kunai with his tails, throw a giant rolling tank aside and easily break out of the Shadow Imitation Technique in seconds. In the anime, he emerged unharmed from a combined barrage of various elemental ninjutsu and also displayed great speed and strength, being able to cut down several allied shinobi in an instant along with destroying the platform they were standing on. However, despite its similarity to Naruto's higher forms, it seems to lack the corrosive chakra cloak that Naruto gains in Version 2 and beyond.[13][14]

In preparation for the Fourth Shinobi World War, Kinkaku is reincarnated by Kabuto Yakushi to fight against the Allied Shinobi Forces. Emerging from the sea near the Land of Lightning's coast, alongside his brother and among the White Zetsu Army, the two engage the opposing First Division. Confronted by Darui, he recognises that he had inherited the Third Raikage's techniques, indicating to Kinkaku that he must be rather strong.

In response to Darui's remark, he says that, since time had passed, even those from Kumogakure had lost respect for them. After Atsui and Samui arrive, Kinkaku retrieves the Bashōsen and Shichiseiken from his mouth, giving the latter to his brother, whilst the Kōkinjō wraps around his arm. Hitting both siblings with the rope, he draws out their word souls, so that Ginkaku can curse them. Reading the special word from the thrown sword, Kinkaku burns Atsui's arm, which forces him to say his forbidden word, causing him to be sealed. While his brother takes Samui hostage, Kinkaku attempts to attack Darui, only to have his arm cut off. Darui then attacks both brothers, freeing Samui, but coming into contact with the rope around Kinkaku's severed arm, which Kinkaku had kicked. He then cuts Darui's word soul and Ginkaku records it.

When Darui mistakenly utters his taboo word, he was inadvertently able to change his most said word whilst being sucked into the Benihisago, cancelling the sealing, unbeknown to the brothers. Disarming Ginkaku and knocking him into Kinkaku, Darui then commandeers the other tools. Launching his blade at the latter, he deflects the sword, only to be struck by another bombardment. Darui uses this opportunity to curse and seal Ginkaku, causing Kinkaku to go berserk and enter into his six-tailed form.

Although Darui apologises for Ginkaku, Kinkaku wreaks havoc on the battlefield, killing many despite Chōza Akimichi's efforts. Observing the Kohaku no Jōhei in Darui's possession, he concludes that they were planning to seal him within it, before ambushing and almost killing Darui if not for Kitsuchi's strike. Deflecting a barrage of kunai, Kinkaku fails to see Chōji Akimichi's attack coming, and as he is hit, he is able to grab ahold of Chōji and toss him away using strength alone. However, this was merely a distraction, so Shikamaru Nara could bind his shadow.

Breaking free with ease, Kinkaku is instead taken control of by Ino Yamanaka, when he tried to kill Shikamaru. Forcing him to respond to Darui's call, he begins to be drawn into the pot, just as Ino returns to her own body. As Kinkaku is being sealed, he laments how such fools could defeat him and his brother, but Darui retorts that even though gold and silver may shine brighter, a mass of copper coins can be worth more than one gold coin.

By nightfall, Tobi arrived at the battlefield and took both the Benihisago and Kohaku no Jōhei, each containing one of the brothers inside, intending to use their Nine-Tails chakra to help enact his Eye of the Moon Plan. During the fight between Tobi and Naruto, Tobi decided to move ahead with his plans and tossed the Kohaku no Jōhei with Kinkaku still inside the pot into the Demonic Statue of the Outer Path.

Kinkaku is a playable character in the following video games: 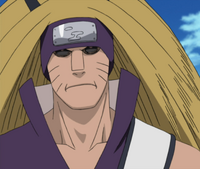