Kizashi Haruno (春野キザシ, Haruno Kizashi) is a shinobi of Konohagakure.

Kizashi is a very jovial and charismatic individual, often times joking with those around him and using puns which at times exasperates his wife, Mebuki. The dynamics between the two, can easily overwhelm others as they comically squabble over very minor things, leading Ino Yamanaka to even call them "intense as usual". Along with this, Kizashi is very kind and cares a great deal about the welfare of his daughter Sakura as seen when he showed great concern over the odd state he had found his daughter in.

Kizashi is a kind-faced man with blue eyes, and dull-pink hair which is styled into the shape of a cherry blossom — a possible allusion to his daughter's name. Unlike his wife and daughter, he has a darker skin-tone. He also has sideburns which flow into his angular moustache and a bit of stubble on his chin. He wears a dark, loose-fitting kimono-shirt which has a green, inner-lining and sleeves which extend beyond his kimono shirt. This is held closed by a simple obi which he wears along with a burgundy coloured ¾-length pants, and a pair of simple slippers. He also wears a simple silver necklace with a pink cherry blossom design on it with a single petal being a deep plum colour.

Kizashi's alternate self wore the standard attire of the Konoha-nin, inclusive of flak jacket. He did not, however, wear the village's forehead protector. His hair colour also appeared to be burgundy, most likely due to his younger age.

After coming home from a sale across town with his wife, Kizashi found Ino and a seemingly confused Sakura waiting by their front door. Seeing her parents, Sakura runs off in tears thoroughly confused. Kizashi later found the pendant Sakura had dropped and he and his wife follow after her to return it, wondering what had happened to his daughter. When returning the pendant, he noted that he had a similar one to her and showed it to Sakura. This jogged their daughter's memory who finally understood what was happening and before Ino could explain that Sakura had amnesia, Sakura then tearfully embraced both of her parents, thanking them.

In the alternate world's history, Kizashi became the Fourth Hokage instead of Minato Namikaze. During this time, the village was thrown into a great war and prior to his untimely death alongside his wife Mebuki protecting the village, Kizashi gave his young daughter his necklace before departing, leaving the Sakura of that dimension an orphan.

Though he did not originate from the manga, Kizashi's character and designs were created by Masashi Kishimoto himself, due to being personally involved in the story planning of Road to Ninja: Naruto the Movie. Kishimoto noted that he always wanted to write them into the main series but could never find the correct time to do so. He also noted that the constant banter between the two was also something that he had intended for the pair. 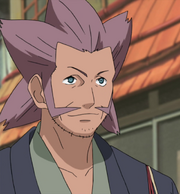