The Right Job for Idiots and Bastards (#15)

"The Right Job for Idiots and Bastards"

Kawaki wakes up from a nightmare of Code antagonising him over being Isshiki's chosen vessel when they were younger. He comments on Code's attitude towards him even though he's not a vessel any more. Amado corrects him, pointing out that while Isshiki's soul being gone means he can't possess Kawaki, he will always be Isshiki's vessel, because his body remains Ōtsutsuki, a reality he should accept. Kawaki threatens Amado, who remains unfazed. Amado comments on Kawaki's plan to implant Code with Boruto's Kāma, agreeing to its theoretical soundness, but questioning its applicability, as it's unknown if Code can be branded with another Kāma, and it would take time for Code to become a vessel, during which Code will strike first to avenge Isshiki's death. He concludes Kawaki's plan is no good, and that what he needs is more power to take Code down. Kawaki asks if Naruto can defeat Code as he did Delta.

He doesn't know how much weaker Naruto is without Kurama, but believes he would die one-on-one against Code. Amado surmises Kawaki has been wanting for power since losing his Kāma, and suggests taking power in the form of a Kāma that is only a weapon, claiming he can make it happen. Kawaki is incredulous that Amado would make such a suggestion, knowing how much Kawaki hates Kāma, and Amado counters that Kawaki is rational to use any means necessary to achieve his goals just like him. Kawaki leaves, and Amado reiterates the choice is his. At Boro's cult, Ada comments on Kawaki's distress at being unable to protect Naruto from Code. She asks if he's willing to let him off the hook, but Code refuses, insisting that those who killed Isshiki must be punished. She brings up Kawaki, and Code explains he's the exception he's making for her, which is why he can't relent on the Hokage. Ada agrees, and asks him to not let Kawaki know of her involvement, so he won't hate her. Bug tries to make them leave, but continues obeying Ada. Code comments on the guards he killed on his way to Bug, but Ada remains unconcerned. Bug suggests they leave to take action, but Ada wants to take their time, as Naruto and Kawaki are both heavily guarded, and the shinobi villages are actively looking for Code. She is confident that when an opportunity presents itself, her Senrigan will spot it. Code comments how much simpler things would be if he could remove his limiters, and thinks he could win against Naruto and Sasuke one-on-one. Ada warns him of her limited ability, restricted to basic taijutsu, as she dislikes fighting and pain. Code says he understands why, feels ashamed and calls her delicate. Bug thinks Ada is making him soft. She believes this makes them a good pair, calling him her knight. He questions what she could do against Kawaki and Boruto, who as Ōtsutsuki she can't beguile and could oppose them. Ada invites him to meet her other knight. Kawaki walks through Konohagakure, thinking of Amado's words. Shikadai calls him and Kawaki snaps at him, drawing the attention of civilians. Shikadai tells him to keep walking, and informs him that while information on him is secret, since Isshiki's attack, rumours false and true have spread. He adds that since Naruto has made it Kawaki's home, Kawaki should just keep his head high. Sumire questions Amado's intent with his suggestion to Kawaki. Amado believes she became his assistant to spy on him, and explains the situation with Kāma now that Isshiki is dead. She questions if there are no other reasons to restore Kawaki's Kāma. Ada orders Bug to activate another cyborg, who she considers the only non-Ōtsutsuki capable of killing her. The cyborg is Ada's younger brother Daemon, who she advises Code not to attack when he hops on Code's back. Other guards find them, and Bug warns they'll be killed if they don't leave. Their orders are to dispose of cyborgs who emerge without reason. Ada tells Code to watch. Each guards that attempts to attack Daemon is killed by their own attack. She explains Daemon's ability to Code. Sumire explains that after Isshiki's attack, Amado seemed motivated by something more than concern for Kawaki's welfare. He wonders if she's really smart or really stupid, and decides she's stupid when she asks if he's plotting something. 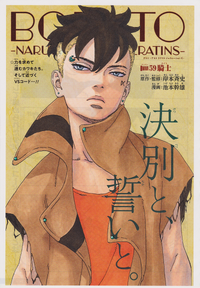