Kobuna is a rather self-confident boy who loves family deeply. Originally, while committed to the Funato and hoping to defeat Kirigakure, he was a cheerful boy, always eager to help out his clansmen. Upon learning of his father's death, however, he immediately committed himself completely to avenge him. However, upon seeing Boruto's genuine regret in killing Funamushi and willingness to sacrifice himself for peace made Kobuna have a change of heart.

Kobuna is a young boy with yellow eyes and dull eyebrows. He has short brown hair, in the centre of which there is a small mop of thicker straw-coloured hair, and bandages around his forearms. He wears a red tank top, shorts and sandals. Kobuna also has a signature purple Funato Clan tattoo on his face shaped like his father's and also wears a small pouch around his neck.

Despite his young age and lack of real experience, Kobuna fights at close range with knife, being able to keep up with Boruto Uzumaki for a time. For long range combat, he uses a blowpipe to fire senbon, showing considerable aim to hit all his targets on the shooting range. He is apparently a strong swimmer, claiming to hold his breath underwater for over 3 minutes. Due to his inexperience, he readily relies on Gokai's assistance and command.

Main article: Great Sea Battle of Kirigakure Arc Kobuna brought seashells for Seiren Funato in her room, and took Ikada Funato outside to show him his progress with the blowpipe, confessing that his mother asked to check on Ikada and get him outside sometimes. He asked Ikada if he'd fight, believing all he had to do was train like he did. When Funamushi's body arrived, he and his mother broke down crying, Kobuna rejecting Ikada's comfort and wishing to know who was responsible so he could avenge his father. He requested that Gokai tattoo him like his father, and take a boat with him to avenge Funamushi.

Kobuna and Gokai attacked Boruto Uzumaki, wishing to avenge Funamushi's death. Boruto defeated Gokai with ease, but upon learning that Kobuna is Funamushi's son and hearing how his words were similar to his and Buntan Kurosuki's when talking about avenging Kagura Karatachi, he froze. Sarada Uchiha arrived in time to protect him from another attack, causing Kobuna and Gokai to retreat.

Kobuna later joined the Funato assault on the Shinonome 1. When Team 7 boarded a Funato ship to try convincing Ikada to stop the war, Ikada called Kobina in for Boruto to confront. Despite Boruto's apology, Kobuna still hated him. When Boruto refused to bring Ikada the Sixth Mizukage's head to end the conflict, he offered his own life instead.

Ikada agreed to it if his team-mates didn't interfere with his death or sought revenge. Despite their protests, Boruto made Sarada and Mitsuki promise to honour his decision, and allowed himself to be beaten by the Funato. Ikada made a point that Kobuna had the right to land the final blow, letting him push Boruto off the ship into the raging waters. Boruto apologised to Kobuna, and shared how similar they were when people dear to them were killed. Kobuna hesitated to push him, so Boruto jumped himself, allowing Kobuna to keep his hands clean. When Boruto's team-mates did nothing despite their strong feelings, Kobuna began crying, and asked Ikada if he did right by avenging his father. Ikada saved Boruto himself, and Kobuna continued crying as Gokai tried to rile the Funato soldiers into continuing the war, despite them sharing Ikada's wish to stop fighting.

In the aftermath of the war, Kobuna, his mother and Gokai visited his father's grave as Kobuna decided that he would become stronger like his father to protect everyone. Gokai offered to help raise Kobuna himself, which he happily accepted. 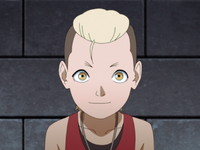