Konoha's Barrier Team (結界班, Kekkai-Han) are in charge of maintaining the detection barrier surrounding Konoha, detecting intruders, and intercepting them. The team is led by members of the Yamanaka Clan.

The Barrier Team resides in a large chamber with two levels. Streams run from the upper level into a large basin on the lower level. Above the basin is a large sphere representing the Sensing Barrier. In front of the sphere are four conical pillars in a square formation. Behind these is a stairway to the upper level, shielded by a large screen with the Barrier Team symbol on it. On the upper level is a small lounge area.

The team consists of two divisions:

The Detection Division has three members, all dressed in clothes similar to those of a Shinto priest. Their hats have the Barrier Team symbol above the Konoha forehead protector. They reside on the lower level of the barrier chamber, one sitting in the middle of the four pillars in front of the sphere, with the other two standing on either side. When someone enters through the barrier, the person in the middle detects them and their point of entry. They do this, apparently, without having to look at the sphere representing the barrier.

The Interception Division has five members. When at rest, they reside in the lounge area on the upper level of the barrier chamber, drinking tea and playing card games. They wear the standard Konoha uniform, but with the Barrier Team symbol on the upper arm, instead of the standard spiral of Uzushiogakure. When the barrier division detects an intrusion, the interception division rush to the site to apprehend the intruder. At least one member of the team is from the Hyūga clan.

The barrier this team is in charge of is the spherical one surrounding the entirety of Konohagakure, even including the sky and undergrounds. It is invisible to most people, but Pain could see it with his Rinnegan. It has a pattern on it similar to the symbol of the Barrier Team. In the circles are giant 界 (kai, literally meaning: boundary), the second kanji of 結界 (kekkai, barrier). The barrier seems to be connected to the sphere in the Barrier chamber; when someone enters through the barrier, the sphere ripples at the point of entry.

Years after the Fourth Shinobi World War, with Ino Yamanaka's lead, the barrier was restructured with the help of the Scientific Ninja Weapons Team to register all native chakra signatures in the village. Koji Kashin was able to enter the barrier with no detection, due to being a clone of the deceased Jiraiya, thus possessing the same chakra. In the anime, during the new barrier system's testing, Hyōi Yorishiro impersonated a village carpenter and copied his chakra, which had made him a near undetectable copy. However, Inojin Yamanaka was able to sense the unusual disturbances from his chakra signature and exposed his disguise, which helped make further adjustments to barrier. 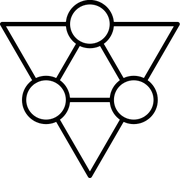