Kotetsu Hagane (はがねコテツ, Hagane Kotetsu) is a chūnin from Konohagakure.

In the anime, captaining a team of genin, the shinobi were tasked with retrieving Condor from the Zeroth Training Ground. Encountering the ostrich, he was beaten up multiple times, during which Izumo Kamizuki arrived to assist him, followed by the pair capturing Condor.[4]

Kotetsu is never seen without his partner and best friend Izumo, whom he trusts explicitly in and out of combat. He is characterised as being the more carefree and irresponsible of the duo, more willing to shirk his duties to hang out in the Jōnin Standby Station eating syrup, for example.[5] Similarly, Izumo admonished Kotetsu's lack of pride in his work when the latter complained that they were simply Tsunade's errand-boys.[6] He is also described as having an intrepid personality,[2] as well as being curious by nature,[1] which was seen from the time he and Izumo disguised themselves as genin in order to see what type of people the new chūnin candidates were.[7] Despite this, Kotetsu is a loyal and dutiful shinobi, with great love for his village and will carry out his missions despite complaining when they are trivial. Kotetsu was also noted to have great respect for Asuma Sarutobi who established a great record in military prowess.[2]

Kotetsu has long, spiky, black hair and dark eyes. He has a strip of bandage running across the bridge of his nose and a light-coloured marking on his chin,[8] although it has the same colour as his hair in the anime. He wears the standard attire of a Konoha shinobi complete with a forehead protector and a flak jacket. When deployed on missions, he usually carries a pair of bladed weapons strapped to his back.

In The Last: Naruto the Movie, two years after the war, he has a slight difference in his appearance, donning the new standard Konoha flak jacket with high top sandals, and the Uzumaki clan logo emblem on an armband on his left arm.

As a chūnin, Kotetsu is a very capable shinobi. He is proficient in genjutsu, able to effectively make most of the genin participating in the Chūnin Exams believe that they were on the third floor, which is where the written test would take place.[9]

Kotetsu is skilled in melee combat. He carries two large kunai-like blades, which he and Izumo can use to simultaneously attack an opponent from either side.[10][11] These kunai blades can also be attached with a chain to restrain an opponent.[12] Perhaps, however, his greatest weapon is his mace, which he stores in a scroll.[13] While his proficiency in it was not seen in the manga, in the anime, it was shown that it could perform aerial assaults and can burrow through the ground to attack from below.[14] He has also been seen wielding a bō.

Izumo and Kotetsu first appeared disguised, trying to convince those planning to take part in the Chūnin Exams not to bother. Team 7 recognised that they had cast a genjutsu on the area, prompting them to give up in light of the group's skill. Seemingly somewhat impressed, Kotetsu attempts to attack Sasuke Uchiha with a kick, which Sasuke reciprocates in kind only to be stopped by Lee. As they retreat and undo the transformation, he agrees with Izumo that the candidates this year seemed very interesting.

Later, Kotetsu and other chūnin arrive alongside Ibiki as invigilators of the first exam. Then, they sat on the outside of the examiners watching them for obvious sign of cheating, telling anyone who was caught five times that they had failed the examination. At one period in time during the exam, he threw a kunai onto the paper of a candidate that had failed, frightening Naruto as it had flown right past him.

He and Izumo were later seen together in the stands watching the preliminary matches. The two discussed Naruto's triumph over Neji Hyūga and the talent that Shikamaru Nara had shown in his battle, assuming he'd be an overall more suitable candidate than anyone else for promotion to the rank of chūnin.

Main article: Search for Tsunade When Tsunade became Hokage, Izumo and Kotetsu started doubling as her assistants and as guards to the front gates of the village. The anime indicates that they are easily ignored or duped by those using the Transformation Technique while on the job.

Main article: Sasuke Recovery Mission During Tsunade's transition into office he and Izumo became the assistants of Tsunade. They were the ones that found Sakura Haruno in the morning after Sasuke Uchiha left Konoha and later informed Tsunade about the incident.

Along with Izumo, he makes a few cameos in filler arcs. The first was the two of them carrying the chair Tsunade had kicked out of her office back to where it belongs. Izumo has a huge bleeding lump on his head as if he was the unfortunate recipient of the chair. The second is them guarding the entrance to Konoha, when the fake Naruto, Kiba Inuzuka, and Hinata Hyūga enter the village. They express shock as the real Naruto and Kiba appear, as they had passed just minutes ago.

Main article: Kazekage Rescue Mission In the anime, Kotetsu is seen with Izumo as Naruto and Jiraiya have returned after two and a half years of training. They are later seen at the village's gate as Team Guy and Team Kakashi are returning from saving Gaara from the Akatsuki.

Main article: Twelve Guardian Ninja In the anime, Kotetsu is among the ninja defending Konoha from Furido and his team of ninja during the attempted siege on the village.

Izumo and Kotetsu were assigned to a Nijū Shōtai team with Asuma and Shikamaru, their mission being to find members of Akatsuki. They successfully managed to do just that. The team tracked an Akatsuki duo to a bounty station, where Izumo and Kotetsu stabbed Hidan during a sneak attack. When Hidan survived, they pulled back and were forced to watch Asuma fall prey to Hidan's jutsu, unable to help him. They instead engaged Hidan's partner, Kakuzu, but were easily captured and subsequently rescued by Raidō Namiashi and Aoba Yamashiro.

Upon returning to the village and debriefing, they inform Tsunade of Asuma's fate. Kotetsu along with Izumo are later seen attending the funeral, mourning the loss of their captain.

Main article: Pain's Assault In the anime, Kotetsu is inserted as a member of the Konoha Barrier Team and is seen playing cards with other members when he hears about an intruder breaching the barrier.[15]

Later, after Pain's invasion, he and Izumo were seen with Genma helping to rebuild the village. Kotetsu said that the Akatsuki had taken away everything that their forefathers had left for them.

After the defeat of the Gold and Silver Brothers, Izumo and Kotetsu launch a surprise assault on Kakuzu slashing him with their blades and immobilises him by wrapping the chain attached to the blades around him. Kotetsu then says they came to repay him from their last encounter and ask Ino Yamanaka, Chōji Akimichi, and Shikamaru to help them seal him. As the battle ensues, Shikaku Nara contacts the two and informs them that he and Izumo, along with Darui were to deal with Kakuzu, while Team Asuma would fight Asuma. Though initially protesting the orders because Izumo believed it to be too cruel to have Team Asuma defeat their teacher, they are then seen chasing Kakuzu across the battlefield. He and Izumo are later seen standing over a defeated Kakuzu who was being restrained under Chōji's colossal fist.

Main article: The Last: Naruto the Movie Two years following the Fourth Shinobi World War, after meteors began frequently hitting the planet, a Kage Summit was convened. Izumo and Kotetsu accompanied Kakashi to it. He is later seen standing beside Izumo as they watch Kakashi deploying a rescue team to rescue Hanabi Hyūga from a mysterious individual. Later, he is seen amongst Kakashi's party, informing Kakashi of a collapsed Hiashi Hyūga. He and Izumo take Hiashi to the infirmary. Kotetsu witnesses the Moon cut into two by Toneri's attack. After Toneri's defeat, he is last seen listening to the worldwide announcement about the Moon crisis being averted along with many other villagers.

Main article: Naruto Shippūden the Movie: The Will of Fire Kotetsu was seen with Izumo, guarding the gates until they confronted Kakashi, who was under Hiruko's control. They were later subdued by Kakashi, unable to prevent the latter from leaving Konoha.

Kotetsu Hagane is a playable character in the following video games: 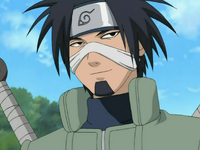