Not much is known about Kumade's life. The anime revealed that he entered the Academy at the same time as Kakashi Hatake and others.[2] At some point in time, Kumade clashed with Zabuza Momochi of Kirigakure. He was however killed by the latter with a combination of the Hiding in Mist Technique and Silent Killing.

Kumade had a short, spiky grey hair. He wore the standard attire of the Konoha-nin complete with a forehead protector and flak jacket along with black gloves with metal plates on the backhand. He also wore a mask that covered the lower half of his face making him look a lot like Kakashi. 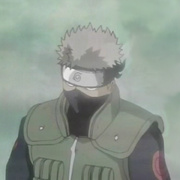