This kunai-like weapon is a blade. Kotetsu Hagane has two in his possession, which he uses in cooperate attacks with his partner Izumo Kamizuki. Its general appearance is that of a kunai, but the blade instead is curved, elongated, and single-edged, giving it a similar appearance and function to a sword. The weapon has a small hole right near its long, bandaged hilt, while at its edge, it sports a larger version of the standard ring all kunai have. While not in use, Kotetsu keeps both his blades bandaged and strapped to his back. The duo can connect their blades with a chain attached to a weight, which they can use to immobilise an opponent. 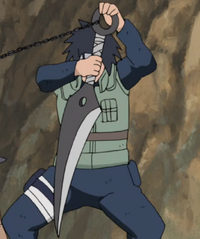