He is a young man with grey hair and green markings on his face. Like Akari, his younger sister, he has red eyes and small horns on his head, signifying a connection with the Genryū, the five dragons that he awakens in the hopes of absorbing their power. He has numerous tags on his robe that allow him to use elemental attacks, and a large scroll strapped to his back with a carved dragon's head on one end. The light green medallion on his belt matches the one Akari wears around her neck, and, presumably, is a symbol of the Genryū.

Kuroma is a very powerful and versatile shinobi. He was able to use the five basic nature transformations through the Sealing Technique: Five Elements technique and, as a testament to his ability, was also well versed in fūinjutsu. He was able to create very powerful barriers. The barriers were strong enough to completely resist anything from coming within its boundaries. The only way to destroy the barrier was the accumulated power of the five Genryū.

Kuroma has also proven himself to be a competent fighter. His speed was great enough to create detailed after images as he moves. He has shown to hold his own against Naruto Uzumaki and his various transformations.

After awakening the five Genryū dragons, Kuroma was able to summon and manipulate their power. His plan to fuse with them was short lived when his sister, Akari, did so instead.

Kuroma is able to freely utilise and manipulate the five basic nature transformations. His ability to simultaneously utilise the elements was shown to even take the likes of Sasuke Uchiha completely off guard. Kuroma's powers stemmed form the elemental tags around his robe. Although not coming from the basic elements, Kuroma was also able to unleash a black aura capable of subduing and fending off even Naruto and Sasuke.

Kuroma was first seen when the team from Konoha tracked him down to his base in Mount Koryū's Ritual Hall. He explained his motives, to become the Light Genryū to get revenge for the world's persecution of the Ryū clan. Once Naruto Uzumaki returned with the elemental orbs crafted from the five Genryū's shining scales, he broke down the five barriers, which each corresponded to an element, and pressed the switches behind them to release the barrier guarding Kuroma.

When Naruto finally entered into battle with Kuroma, his efforts to defeat him proved somewhat fruitless, until, all of a sudden, Sasuke Uchiha arrived, having just battled with Akatsuki's Kisame Hoshigaki up above, the latter of whom then disappeared. Perceiving Kuroma as a threat to his plans to kill Itachi, Sasuke attacked him, but ignored Naruto. After Naruto was seemingly defeated, Sasuke decided to leave, as he was wasting time trying to defeat Kuroma instead of hunting Itachi, who was in the area. Naruto's team-mates attacked Kuroma, only to be blown back by his power. Seeing his friends get hurt, Naruto went into a three-tailed form and attacked Kuroma. After Naruto had defeated Kuroma, Akari plead with Naruto not to kill him, but Naruto, influenced by the Nine-Tails, simply charged at her instead. Just before he got to her, though, Sakura Haruno shouted his name, bringing him back to his senses after an inner battle with the fox. This, however, gave Kuroma enough time to initiate the ritual to take the power of the Genryū.

However, before he could actually transform into the Light Genryū, Akari pushed him out of the way, taking the power for herself so that she wouldn't lose Kuroma. As Kuroma began to mourn the loss of Akari, she turned into the Light Genryū. Akari then became the final boss of the game. She had six forms, with the first five matching up to the elements of the previous five Genryū, as well as a light-based form, and Naruto had to defeat each form before he could deal the finishing blow. Once defeated, Akari returned to normal, and she and Kuroma soon discovered that their horns, as well as Kuroma's facial markings, had disappeared, freeing them from their burden as Dragon Guardians. The two departed together to lead new lives, no longer having to protect the Dragon Blade, and no longer being persecuted because of their appearances. 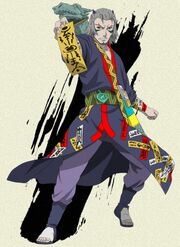