Naruto wakes up in his mind, and is greeted by Kurama, who says this is farewell and that this might be their last conversation. Naruto says they've been through a lot together, and is glad Kurama was around. Kurama is annoyed at how little Naruto has to say, who admits he has no idea what to say. Kurama is glad they were able to take Isshiki down, and considers it not a bad way to go. Naruto is concerned about the village, Boruto and Kawaki, but Kurama says that he'll have to take care of that on his own. Kurama explains that when tailed beasts are extracted, their jinchūriki die, but it won't happen to Naruto, who should wake up soon. Kurama reveals the price for using Baryon Mode is its life, not Naruto's. Kurama points out it never lied to Naruto. Kurama justifies the deception, saying that if Naruto had known the cost, he would have hesitated to use it, or even outright refused it.

Kurama is annoyed at Naruto's concern and begins to fade. It warns Naruto about not having its power anymore, and not to overdo it, else he'll join it soon. Naruto regains consciousness as Boruto, Sasuke, and Kawaki tend to him. Naruto explains the situation to Sasuke. Kawaki asks if they can discuss it after getting back home. Sasuke asks if Boruto can do it, as he can no longer use his Rinnegan. He doesn't blame Boruto for it, and states they should consider themselves lucky they survived. Kawaki tells Boruto to hurry it. Code wakes up at the Ten-Tails' pen, and checks on it. Code checks on his White Kāma, and muses he wouldn't waste the opportunity to become an Ōtsutsuki like Kawaki did. The Kāma activates, manifesting Isshiki's spirit, who addresses Code as his most loyal servant. Isshiki notices the irony of his soul having no vessels where to go, and appearing to Code, who couldn't become a vessel. Code asks what happened, and Isshiki explains he was betrayed by Amado and forced to reincarnate on Jigen, which erased Kawaki's Kāma. Code laments not being able to serve as Isshiki's vessel, but Isshiki declares the White Kāma is his legacy, and that Code will inherit his Ōtsutsuki Will as well. Unwilling to let that will die, Isshiki instructs him to do as the Ōtsutsuki have done for thousands of years, consuming the life of planets, and specifically to cultivate a God Tree by feeding either Boruto or Kawaki to the Ten-Tails. By consuming the new tree's chakra fruit, Code will become a new Ōtsutsuki. As a follower of Isshiki's, Code wants to dispose of the ones who defeated him. Boruto struggles to take them back to Konoha. Kawaki believes Boruto is scared that Momoshiki will manifest again. Kawaki assures Boruto he'll help him getting rid of his Kāma like Boruto helped him. When the two begin discussing, Boruto is able to create a rift for them to return. At the hideout, Shikamaru coordinates with others, while Amado is deep in thought. Shikamaru receives word they're back, and that Isshiki was defeated. Sumire notices Amado's concern for Kawaki. Kawaki tells Boruto to do it faster next time, and Boruto says he feels anything's possible as long as he's with Kawaki. Code lists the ones involved in Isshiki's defeat. 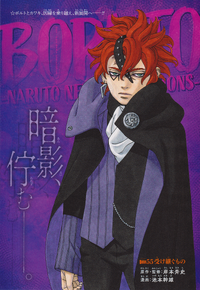