Legacy (受け継ぐもの, Uketsugu Mono) is volume 14 of the Boruto: Naruto Next Generations manga.

Both Isshiki and Sasuke are impressed by Naruto's chakra and wonder what it could be. Kurama explains the principles of this mode to Naruto, how it consumes their chakra to create a new type of energy. Kurama stresses the importance of avoiding unnecessary moves and even unnecessary thoughts to make Baryon Mode last longer. Isshiki attacks Naruto, who counters his moves and lands hits of his own with ease. Sasuke considers Naruto's performance to be above Isshiki's. Isshiki attempts to crush Naruto with his cubes, but Naruto tosses them at him. Sasuke grabs Boruto and takes him to a safer distance from the fight. Naruto and Isshiki exchange more blows, and Isshiki throws more shrunken rods at him. Naruto is able to grab them even before they regrow, impressing Sasuke, who struggled to track them even with the Sharingan. Isshiki is incredulous of how fast Naruto got so much stronger.

At Konoha, Amado asks about Kawaki's prosthetic hand. Katasuke explains that it runs on Naruto's chakra, as it was originally made for him. Sumire asks if he's able to restore Kawaki hand, which Amado confirms is the first thing he intends to do after they don't have to hide from Isshiki. Through the prosthetic, Kawaki feels Naruto's chakra getting weaker. In the battlefield, Sasuke and Isshiki also notice it. Boruto passes out. Isshiki grasps the life-shortening nature of Naruto's power. Much to his surprise, Isshiki begins spitting up blood. Kurama explains to Naruto that the life-shortening effects of Baryon Mode are, in this case, an advantage to them, because they also apply to Isshiki when they come into contact. Isshiki estimates that instead of 20 hours, he has less than 30 minutes left in his current vessel. Kurama makes it clear that their goal isn't winning, but getting in attacks so Isshiki runs out of time before they do. Naruto continues exchanging attacks with Isshiki. Sasuke notices Naruto's chakra continuing to get lower. Isshiki notices his lifespan getting smaller, down to just 10 minutes, and Naruto taunts him about it. Isshiki notices something that pleases him. Shikamaru asks Kawaki to explain himself, but when he tries to focus, a rift appears around him, taking him to the battlefield. Because Kawaki's prosthetic runs on Naruto's chakra, he was able to use that connection to find Kawaki and bring him there. Sasuke stresses about this turn of events, and Boruto opens his right eye.

Naruto and Sasuke are startled by Kawaki's presence. Isshiki greets Kawaki. At Konoha, they're confused about Kawaki's disappearance, and Amado considers they're out of options. Kawaki understands Isshiki wants to rebrand him. Isshiki muses on how little time he has left, and how far he was pushed. Kawaki retorts he's glad he gets to watch Isshiki die. Isshiki counters it'll only be a short nap until he's reborn in Kawaki's body. Naruto tells him to run, so Isshiki stomps him hard enough to force him out of Baryon Mode. Kawaki rushes away, but Isshiki intercepts him and grabs him by the throat. Before he can rebrand Kawaki, Sasuke switches places with him. Sasuke yells for Kawaki to pick up the sphere he prepared and throw it at his feet, which Kawaki does. It's a smoke bomb.

Isshiki beats Sasuke into the ground, and says tricks won't hide him from the Byakugan. However, the bomb was made with a special mineral that blocks such abilities, buying Kawaki time for Isshiki's life to run out. Isshiki flies up in the air, but still can't find Kawaki. Furious, Isshiki crashes down at Naruto, and threatens to kill him if Kawaki doesn't give himself up. Holding his prosthetic hand, Kawaki thinks back to hiding from Jigen and being punished when he was discovered. He thinks back to being accepted as Naruto's student. Kawaki reveals himself, and Isshiki flies at him, ignoring a Fire Release Kawaki throws at him. Isshiki grabs him, and berates him for thinking he's a shinobi when he's only a vessel for him. Kawaki disputes it, saying Naruto said he had a knack for it, and that he gave him a reason to live. Isshiki points out the affection he has for Naruto caused him to give himself up either way. Kawaki is staunch that a world without Naruto is worthless to him and he'd rather die. Isshiki applies a Kāma to Kawaki and celebrates, satisfied. His body begins to break down. The Kāma applied to Kawaki begins to vanish, shocking and infuriating Isshiki. The real Kawaki reveals himself, the one Isshiki branded merely a shadow clone. Kawaki berates Isshiki for being outsmarted and defeated by a mere vessel. Kawaki jumps down and lands on Isshiki's crumbling body. Naruto is surprised by Kawaki's shadow clone, though he says he can barely make one. Sasuke approaches, and pointedly asks about Naruto's new power. Kawaki is also interested. Suddenly, Boruto rushes at them, stabbing Sasuke's Rinnegan. Sasuke falls to the ground. Speaking through Boruto's body, Momoshiki admits surprise that they defeated Isshiki, but is glad for it, and declares them the only nuisances left.

Momoshiki is satisfied, having blocked Sasuke from using his space-time ninjutsu, and glad to have emerged a second time, feeling free. Sasuke deduces from Momoshiki's movements that Boruto's previous injuries, including his broken wrist, have been healed. Kawaki recalls his promise to get rid of Kāma with Boruto, and tries calling out to him. Momoshiki muses that Kawaki is also free, noting that Isshiki's soul has completely vanished, and wonders where is his smile. Kawaki continues calling out to Boruto, and Momoshiki notes his freedom is fleeting. Kawaki attacks Momoshiki, who counterattacks. Dodging one of Kawaki's attacks, Momoshiki flies up and comes down, stabbing Kawaki in the back. Momoshiki confirms the progression is quite far, which should make his plan possible. Sasuke kicks Momoshiki aside.

Kawaki asks what he means, and Momoshiki explains that even if Kāma has vanished, the data it extracted remains in his body. Much like Boruto's, Kawaki's Kāma was about 80% extracted, meaning most of his body is mostly Ōtsutsuki, and thus a viable sacrifice to cultivate a God Tree. Its fruit might be smaller, but still decently sized. Momoshiki plans to find Isshiki's Ten-Tails and feed Kawaki to it. Kawaki is furious at Ōtsutsuki using people as objects and strikes again. Naruto struggles, and fails to get up. Feeling heavy like lead, he passes out. Kawaki continues calling out to Boruto as he fights Momoshiki. Sasuke attacks him with his sword, which he electrifies when Momoshiki blocks it. Momoshiki jumps back, and asks if Sasuke is really going to kill his favourite student. Recalling his promise to Boruto, Sasuke confirms he will, because he's Boruto's teacher, and uses Amaterasu. Momoshiki blocks it with a shadow clone. Careful not to overuse chakra, Sasuke goes for a Fire Release: Great Fireball Technique, which Momoshiki dodges. Sasuke notes that Momoshiki hasn't absorbed a single jutsu when he's had the opportunity. Kawaki notices Naruto passed out and alerts Sasuke, who believes it's a side effect from the power he used. He says they have to focus on Momoshiki, who while intent on sacrificing Kawaki, could just as easily flee with space-time ninjutsu. He wants to recover Boruto so they have a way to go back. Noting that Momoshiki emerged when Boruto passed out from using too much chakra, and that he has avoided absorbing jutsu, Sasuke believes that if they can refill Boruto's chakra, Boruto will resurface. From a distance, Momoshiki considers his options. Sasuke wants to force Momoshiki to absorb chakra without them going down first. Something hits Sasuke in the chest, knocking him to the floor. Momoshiki comments on how painful it is, and Sasuke understands he used Boruto's Vanishing Rasengan. Thinking back more of his arguments with Boruto, Kawaki attacks again. When Momoshiki prepares to take him away, Kawaki begins to self-immolate, forcing Momoshiki to absorb the fire so as not to lose his only sacrifice. Momoshiki considers it not to be much, but decides to move fast before Boruto recovers. He attempts to teleport with Kawaki, but Boruto stops him. Boruto breaks Momoshiki's horn off, and the Kāma recedes. He collapses, exhausted, and apologises to Kawaki for the trouble. Kawaki apologises back. Sasuke notices something off with Naruto.

Naruto wakes up in his mind, and is greeted by Kurama, who says this is farewell and that this might be their last conversation. Naruto says they've been through a lot together, and is glad Kurama was around. Kurama is annoyed at how little Naruto has to say, who admits he has no idea what to say. Kurama is glad they were able to take Isshiki down, and considers it not a bad way to go. Naruto is concerned about the village, Boruto and Kawaki, but Kurama says that he'll have to take care of that on his own. Kurama explains that when tailed beasts are extracted, their jinchūriki die, but it won't happen to Naruto, who should wake up soon. Kurama reveals the price for using Baryon Mode is its life, not Naruto's. Kurama points out it never lied to Naruto. Kurama justifies the deception, saying that if Naruto had known the cost, he would have hesitated to use it, or even outright refused it.

Kurama is annoyed at Naruto's concern and begins to fade. It warns Naruto about not having its power anymore, and not to overdo it, else he'll join it soon. Naruto regains consciousness as Boruto, Sasuke, and Kawaki tend to him. Naruto explains the situation to Sasuke. Kawaki asks if they can discuss it after getting back home. Sasuke asks if Boruto can do it, as he can no longer use his Rinnegan. He doesn't blame Boruto for it, and states they should consider themselves lucky they survived. Kawaki tells Boruto to hurry it. Code wakes up at the Ten-Tails' pen, and checks on it. Code checks on his White Kāma, and muses he wouldn't waste the opportunity to become an Ōtsutsuki like Kawaki did. The Kāma activates, manifesting Isshiki's spirit, who addresses Code as his most loyal servant. Isshiki notices the irony of his soul having no vessels where to go, and appearing to Code, who couldn't become a vessel. Code asks what happened, and Isshiki explains he was betrayed by Amado and forced to reincarnate on Jigen, which erased Kawaki's Kāma. Code laments not being able to serve as Isshiki's vessel, but Isshiki declares the White Kāma is his legacy, and that Code will inherit his Ōtsutsuki Will as well. Unwilling to let that will die, Isshiki instructs him to do as the Ōtsutsuki have done for thousands of years, consuming the life of planets, and specifically to cultivate a God Tree by feeding either Boruto or Kawaki to the Ten-Tails. By consuming the new tree's chakra fruit, Code will become a new Ōtsutsuki. As a follower of Isshiki's, Code wants to dispose of the ones who defeated him. Boruto struggles to take them back to Konoha. Kawaki believes Boruto is scared that Momoshiki will manifest again. Kawaki assures Boruto he'll help him getting rid of his Kāma like Boruto helped him. When the two begin discussing, Boruto is able to create a rift for them to return. At the hideout, Shikamaru coordinates with others, while Amado is deep in thought. Shikamaru receives word they're back, and that Isshiki was defeated. Sumire notices Amado's concern for Kawaki. Kawaki tells Boruto to do it faster next time, and Boruto says he feels anything's possible as long as he's with Kawaki. Code lists the ones involved in Isshiki's defeat. 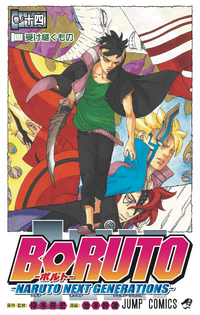