Life and Death Battles!! (命懸けの戦い!!, Inochigake no Tatakai!!) is volume 8 of the Naruto manga.

Team Kakashi open their heaven and earth scrolls, and Iruka Umino is summoned. He informs them that this test was to determine if they could perform their missions correctly. He then goes on to tell them the motto of the chūnin written by the Hokage. The Hokage decides to continue on with the third stage of the exam despite the appearance of Orochimaru.

The seven remaining genin teams line up to be briefed on the final test. The Hokage goes on to explain the true reason behind different countries taking the exam together. Hayate Gekkō appears and tells the group about a preliminary to the third stage of the test in order to cut down their numbers even further. Kabuto abandons the exam.

Hayate Gekkō explains that from now on the battles will be one on one. Kabuto's team is revealed to be working under Orochimaru. Sakura encourages Sasuke to give up but he refuses. He also tells Naruto that he wants fight with him. The jōnin take notice of Sasuke's condition and decide to step in if it worsens. Sasuke is chosen to fight in the first match along with Yoroi Akadō from Kabuto's team.

Sasuke and Yoroi prepare to fight and the rest of the participants go upstairs to observe. Kakashi takes this opportunity to warn Sasuke not to use his cursed seal, stating that if he activates it the match will end and Sasuke will be detained. Since he cannot use his Sharingan without inadvertently activating the cursed seal, Sasuke and the watching Orochimaru wonder how he will handle this handicap. When the match starts Sasuke resorts to taijutsu, which gives Yoroi ample opportunity to grab Sasuke and absorb his chakra. Knowing that a prolonged battle will leave him exhausted and thus unable to win, Sasuke uses his Lion Combo, a technique based off Rock Lee's Front Lotus, on Yoroi.

While using the Lion Combo on Yoroi, Sasuke's cursed seal starts to activate. Fearing disqualification, he suppresses it and defeats Yoroi, impressing everyone watching, particularly Orochimaru. Kakashi takes Sasuke away to seal off the cursed seal, disappointing Sasuke since he wants to see the other matches. Shino Aburame and Zaku Abumi are selected for the second match.

With Zaku's arms still damaged from his earlier fight with Sasuke, Shino suggests that he forfeit since they will only be damaged further. Not wanting his pity, Zaku uses his one good arm to shoot blades of wind at Shino from the tubes in the palms of his hands. Meanwhile, Kakashi seals off Sasuke's cursed seal. Orochimaru approaches him and tells him it is useless, as Sasuke's Sharingan will become his no matter what Kakashi does. Kakashi asks about his Team Dosu, but Orochimaru no longer has an interest in them. Zaku realises that he has become boxed in by Shino's bugs. Since he cannot destroy all of them with one arm, he unslings his other arm to attack. When he starts to shoot air from his palms his arms detonate and sever, the tubes having been blocked off with bugs. Shino defeats him.

Kakashi contemplates fighting Orochimaru by himself, but realises that it would only result in his death. Orochimaru leaves, promising to take Sasuke at a later date. After having Sasuke taken care of, Kakashi returns to the preliminaries, assuring Sakura that Sasuke will be fine. Kankurō and Misumi Tsurugi are paired for the next match. Misumi quickly restrains Kankurō and threatens to break his neck if he doesn't surrender. When Kankurō refuses, Misumi does as he warned, only to find that he has broken the neck of a puppet. Kankurō takes advantage of Misumi's close proximity to the puppet to capture him and crush him despite Misumi's attempts to give up, winning the match. Sakura and Ino are selected for the fourth match.

Sakura and Ino think back on their childhoods together and how, when they amicably ended their friendship, they agreed they would become rivals that would not show each other any sympathies. Intending to stay true to their promise, both relocate their forehead protectors to their forehead, removing any possibility of mercy by fighting as Konoha ninja and not old friends. The two exchange blows and Sakura punches Ino in the face, making Ino happy that Sakura is taking things seriously.

Sakura and Ino continue exchanging blows. Being at par with each other, neither is able to gain the upper hand, so both soon grow tired. Sakura berates Ino for being too focused on her appearance and beauty rather than her kunoichi skills, and Ino apparently snaps at her insults, cutting her hair and throwing it to the ground. Desperate, Ino tries to use her Mind Body Switch Technique to force Sakura to forfeit, despite knowing how inaccurate it is and that she will be left defenceless if she misses. Sakura dodges the attack and appears to have won, but finds that she is immobilised by the strands of Ino's cut hair which have been infused with chakra to form a binding rope. Ino is revealed to only have pretended to snap and to use the Mind Body Switch Technique in order to lead Sakura into the trap. She uses the Mind Body Switch Technique again knowing it cannot miss and succeeds on gaining control of Sakura's body. 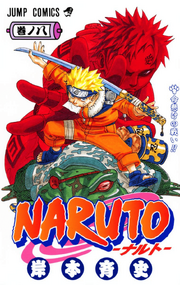