The Lightning Cutter is the special name for Kakashi Hatake's Chidori.

Kakashi's Chidori gained the name "Lightning Cutter" when he used it to split a bolt of lightning.[2] Although this indicates greater finesse with Kakashi's Lightning Cutter than exists with the standard Chidori, it isn't clear how they differ because they are performed in fundamentally the same way: both concentrate lightning chakra in the hand; both are used to rapidly pierce targets; both cannot be safely used without the Sharingan.[3] When Deidara refers to Sasuke Uchiha's jutsu as Lightning Cutter, Sasuke corrects him and explains that his jutsu is technically only a Chidori.[4]

Like the Chidori, the Lightning Cutter requires a large amount of chakra to be performed, placing a limit on how many times it can be used per day. In Part I, Kakashi can use it four times per day,[5] which he increases to an unspecified number in Part II. During Part II, Kakashi demonstrates several new uses for the Lightning Cutter, such as forming one in each hand to counteract powerful lightning attacks.[6] On another occasion, he links his Lightning Cutter with one of his shadow clone's, using the arc of electricity to cut through multiple targets.[7] He can also flow it into kunai, enhancing its slicing power and giving him a method of throwing the Lightning Cutter.[8]

While Kakashi's body is briefly inhabited by the spirit of Obito Uchiha, he applies Six Paths Power to his Lightning Cutter, allowing it to damage Kaguya Ōtsutsuki. He combines this usage with Kamui, causing her counterattacks to pass through him harmlessly.[9] 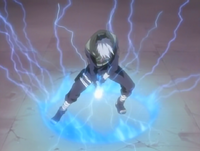