Boruto buys Extreme: Shinobi Picture Scrolls card packs, and is frustrated by still not getting Sasuke's card. Kawaki notices his surveillance, whose blatancy bothers Boruto. Shikadai points out such surveillance is why he can move out freely despite the threat of an attack. Kawaki questions how much it actually bothers Boruto, who sleeps soundly at night. Boruto questions why direct surveillance is necessary when the village's Barrier Team has a Sensing Barrier in place. Kawaki is unfamiliar with it, so Inojin and Shikadai explain it to him. Going by their explanation, Kawaki determines the barrier merely identifies intruders, and dealing with them is another matter. Boruto doesn't have faith that the shinobi watching them would be a match for Code should he attack. Inojin believes him to be a sensor who would relay their location and situation, so Naruto or Sasuke would fight Code. Boruto is still irked by the lack of privacy. Kawaki recalls Amado's words about Naruto fighting Code. Inojin vouches for the village's sensing unit since the Yamanaka Clan is involved in it, pointing out it would be necessary to erase one's chakra signature to evade them.

Boruto complains about his every moment being watched by strange, older men, and buys another card pack. Kawaki ponders on Inojin's words. Sasuke investigates one of the Claw Marks around the village, and the shinobi watching them report no activity since their discovery. He doesn't believe this is where Code will emerge, as this is not where he would do it, but concedes he has no authority to tell the shinobi to stop monitoring it. Shikamaru receives reports while smoking atop the Academy. Amado joins him, admitting surprise by the trouble, finding Code to be cautious, but not particularly bright. He pulls out a cigarette, but Shikamaru tells him smoking is prohibited there. Shikamaru is suspicious that Amado would find anything unexpected, still believing everything to be going accord some secret plan of his, and Amado assures him the chain of surprises so far would be unthinkable for him. The biggest surprise for him has been Kawaki's love and devotion to Naruto. Upon the mention of devotion, Shikamaru asks if Code's devotion to Isshiki and how long they haven't heard from him could mean he's too depressed to attempt vengeance. Amado finds it too optimistic, but great if it were true. At night, at the Uzumaki home, Kawaki takes out the trash, noting the sensor shinobi watching him. He goes back inside, going through a tree in the garden. Boruto talks to Kawaki inside, but senses him still outside. He determines the Kawaki inside to be a shadow clone, while sensing the real one moving away from the house. Boruto thinks that if he's caught, their surveillance will be tightened, but is surprised the sensor shinobi hasn't pursued Kawaki. He determines that Kawaki somehow erased his chakra signature. Ada reports to Code that Kawaki is on the move alone. He questions how Kawaki managed it if people are watching him, and Ada explains that erasing one's chakra signature is a standard Ōtsutsuki ability. She believes Kawaki shouldn't be aware of it yet, having accessed it on instinct. Code wants to seize the opportunity, and emerges from a Claw Mark discreetly applied to a tree. He puts his mouth through a mark to ask Ada for guidance, who finds it gross. Boruto can't go after Kawaki without the sensor shinobi following him, and wonders how Kawaki did it. He asks Kawaki's shadow clone how he erased his chakra signature, and puzzled, wonders how he can still sense Kawaki. The real Kawaki speculates on the explanation. Ada reports on Kawaki's movements to Code, who intends to ask Kawaki why he's outside the village directly. 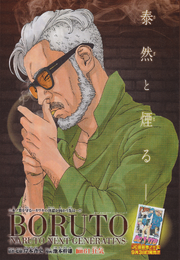