During the Third Shinobi World War Mahiru was partnered with Kakkō and Taiseki. He went out to surveillance the area in which Team Minato was travelling. He employed about twenty shadow clones against the team, only to have all of them destroyed by Kakashi's Chidori. However, in the end he was able to counter the Chidori and would have succeeded in killing Kakashi without the intervention of Minato Namikaze who quickly got Kakashi to safety before holding a kunai to Mahiru's neck. Mahiru was then killed, but not before expressing regret for not running away when given the chance.

Mahiru was described as a very prudent individual who greatly valued his life and was filled with hatred.[1] Not much else is known about his personality except for the fact that he regarded Kakashi as a "brat" yet he feared Minato.

Mahiru's hairstyle consists of two spiked ponytails, one sticking upwards from the top of his head, the other downwards from the back. He wore the standard Iwa shinobi uniform, complete with a flak jacket and a shirt having no right sleeve along with a dark indument hanging from his waist onto his right leg, reaching to his knees. He wore a simple forehead protector with a blue coloured cloth.

At his best working alone, Mahiru employs the use of kenjutsu in combat, being able to overpower the child prodigy, Kakashi, with his extreme speed and sword. Aside from kenjutsu, Mahiru makes use of high-level ninjutsu like the Shadow Clone Technique, capable of employing up to twenty clones at once. He was also skilled with Earth Release techniques using it to ambush opponents.

Mahiru is a playable character in the following video games: 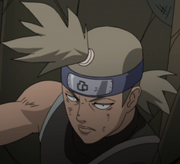