Makaro holds a great deal of respect for his village's Hokage.[1]

Like many members of the Akimichi clan, he is described as robust in appearance. He has dark brown spiky hair and dark eyes. He also has triangular markings on both sides of his cheek. He wears the customary armour of his clan, with the kanji for "food" (食, shoku) on the chest. With the outbreak of the Fourth Shinobi World War, he sports his village's flak jacket.

Makaro is mentioned to have only been promoted to chūnin before the war.[1] Although the full extent of his abilities are unknown, as an Akimichi, Makaro can convert calories into chakra in order to perform his clan's secret techniques.

Makaro and his comrades watched on as the previous Hokage arrived on the battlefield. 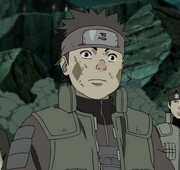