Malice (マリス, Marisu) was a kunoichi and the main antagonist that appeared in Naruto Shippūden 3D: The New Era.

Malice was the most skilled kunoichi of the Rinha clan when her clan was around. During the years of the shinobi wars, shinobi from other countries began targeting her clan for their medical ninjutsu. Her husband got involved and ended up getting killed in battle. After the last war ended, a deadly plague began spreading and her son, Yūto, was taken by the Five Kage to produce an anti-body to eliminate the plague. They succeeded, but at the cost of Yūto's life. She became the village head of a small village until she disappeared.

Malice had medium black hair, light yellow-orange eyes, and two silver hairpins tied on the back of her hair. Her fringe covered her right eye. She wore a black kimono with a white sash, black fingerless gloves, a white jacket with a higher collar and blue rose-printed textures, black leg warmers, grey shinobi sandals and a black forehead protector around her neck.

Malice had proven to be a very cunning and capable kunoichi. She was very alert, studying her opponent's personalities and abilities in order to easily break them down, thus proving both intelligent and tactically skilled.

She was capable of using her clan's medical techniques and forbidden techniques with little effort. Malice also had an immense chakra reserve, being able to preserve herself for many years. In terms of ninjutsu prowess, she was well versed with fūinjutsu. She was able to conjure up a crystal barrier cage, capable of trapping anything inside, in suspended animation. Although, with enough chakra, they are able to escape; which is a testament to her immense chakra levels. In the area of medical ninjutsu, she was able to revitalise herself with a huge increase of stamina and chakra. Little is known about her actual fighting capabilities, but she proved very proficient in the use of the Puppet Technique. She was able to fight perfectly well with the puppet copies of the five Kage, skilfully mimicking their individual skills and fighting styles. She was even capable of controlling the puppets without the use of chakra threads.

In a ploy to revive her son, and get revenge on the five Kage, Malice had an unknown technique that allowed her to perfectly revive the dead, given enough chakra. The amount required was presumably equivalent to the amount of chakra taken from the five Kage.

Malice was said to be the greatest kunoichi of her clan, so it can be assumed that she had mastered her clan's kekkei genkai. With it, Malice is able to forcefully absorb chakra from anyone and create perfect copies of them. The absorption could be performed through two mediums: Either directly from the opponents body, whether close or from considerable distances. The other possible medium was through her puppets. When defeated, the puppets simply returned to their original puppet form.

Malice kidnapped the current Five Kage and sealed them in a crystal as well as taking some of their chakra. Using their chakra, Malice turned her puppets into exact copies of the Kage. Naruto began noticing Tsunade's strange behaviour and learned that "Tsunade" is really a puppet. Naruto travelled to each of the Five Great Shinobi Countries and taking out the fake Kage. When Naruto defeated the fake Gaara and Mei Terumī and was about to return to Konoha, he encountered her as she introduced herself and explained to Naruto about peace. As Naruto defeated Malice, she became a puppet and Naruto realised that the fake Kage were not the only puppets.

After defeating the fake Fourth Raikage, she appeared once again before Naruto and told him to find her at her old mansion to free the Kage. Naruto found and defeated her. Due to her chakra becoming weak, the Kage were released from the crystal they were sealed in. Ōnoki knew Malice after they were freed. She fled beneath the mansion with Naruto giving the chase. Naruto caught up and Malice revealed her plans to revive her son with the Kage's chakra. Malice succeeded, however, Yūto turned into a giant monstrous puppet, which according to Naruto, was the result of how Malice revived him. Yūto returned to normal after Naruto defeated him in a battle. She asked for Yūto's forgiveness to which he accepted. She expressed her desire for peace and entrusted her hopes on Naruto to change the world. As the mansion began collapsing, she remained to stay, hoping to join with Yūto in the afterlife. 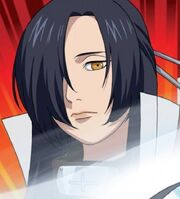