Mamushi (マムシ, Mamushi) is a shinobi from Sunagakure and a teammate of Sana and Saya.

Mamushi appears somewhat deranged, loving the notion of battling and violence. At the same time, he is very submissive before Saya, to the point where he refers to her as "Lady" (お嬢さま, Ojō-sama). Mamushi is also easily intimidated by her, as he shirks away, when she is enraged.

Mamushi has short spiky black hair and wide-open eyes with noticeable veins. He also wears a blue Suna forehead protector in a bandana-style around his mouth. He wears an orange poncho around his neck, green midriff suspenders, and brown pants with long arm warmers and bandages around his arms.

Mamushi seems to favour close and mid-range combat, fighting with long snakes he has hidden in his sleeve. The snakes are venomous, injecting paralysing venom in his opponents.

Mamushi, alongside his team, participated in the joint Chūnin Exams. He and his team were one of the few who managed to qualify for the second round. The next day, the second exam proctor — Temari, announced the start of the second round taken place within Demon Desert.[1] On the third day of the second exam, with the goal of having to pass by obtaining an Earth and Heaven scroll from an enemy team, his team located Team Asuma. Then, Mamushi and Sana clashed against Chōji. As the battle wages, a giant Chōji restrains both him and Sana, but they are soon freed from the Konoha-nin's grasp by Saya who turned her technique onto Chōji after leaving Ino's body.[2]

Ultimately, Ino succeeds in repelling Saya from Chōji's mind, to which the large ninja quickly counters and attacks the Suna team, forcing them to retreat. After regrouping, Saya demands to take revenge on Team Asuma for the recent humiliation. After finding Team Asuma, along with producing a sandstorm to keep the Konoha-nin at bay while Saya unleashes a swarm of sand puppets to attack them, Sana masks Mamushi with sand for an additional sneak attack. Despite this effort, Sakura emerges through the sand and defeats the team with a single punch.[3]

Later, Mamushi's team arrived at the main building for the end of the second exams. However, the Chūnin Exams were ended early before starting the finals due to controversy happening in the second exam. Instead, it was decided by Gaara that a report on each participant would be sent to their respective village leader for them to decide if they would be promoted.[4] 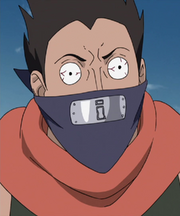