The Mangekyō Sharingan (万華鏡写輪眼, literally meaning: Kaleidoscope Copy Wheel Eye) is an advanced form of the Sharingan that has only been activated by a handful of Uchiha.[1] They are noted to be the "heavenly eyes that see the truth of all of creation without obstruction" (天壌の理を掌握せし瞳, tenjō no kotowari o shōakuseshi hitomi).[2]

A Mangekyō Sharingan is distinguished from a normal Sharingan by its appearance, which changes the form of the tomoe seal. While the exact design differs for each user, they all resemble pinwheels. It is initially awakened by the trauma suffered from witnessing the death of someone close to the user. Uchiha have historically misunderstood this criteria as the user needing to be responsible for the person's death, and for that reason they developed the practice of killing their closest friends in order to gain the Mangekyō Sharingan.[3] Obito's Mangekyō activated immediately after his trauma, whereas, in Naruto Jinraiden, Sasuke's Mangekyō didn't activate until several weeks afterwards.

The Mangekyō Sharingan retains all of the Sharingan's generic abilities. In addition to that, the Mangekyō grants powerful abilities that differ between each eye, though abilities may be similar in nature; both Sasuke and Itachi have access to Amaterasu's flames, though the extent to which they can use them differ. The abilities of a Mangekyō Sharingan may not even be the same for both of a single user's eyes, as Itachi has Amaterasu in one eye and Tsukuyomi in another. As each eye houses the particular dōjutsu techniques, one can only access them if they currently house the said eye, even if they were the originator of the said technique. Once a user awakens the Mangekyō in both eyes,[4] they are able to perform Susanoo, even without either eye. In addition to the unique techniques, the straight tomoe (直巴, choku tomoe) of Madara's and Sasuke's Mangekyō Sharingan[5] grants them greater fluidity in their movements when fighting.[6] Madara was able to sense this form and later deduced that he and Sasuke must be connected by more than blood.

Using them comes with a certain sensation that sensors can feel, although it doesn't show which technique is being prepared.[8] Even for true wielders, usage of the Mangekyō Sharingan's abilities can cause a great strain on the user. It drains a considerable amount of chakra when simply activating and maintaining the advanced dōjutsu, and even more through each technique used. Even more, it can cause considerable damage to their being, leaving the body in agonising pain and causing deterioration to their vision until eventually over-usage leaves them blind.[9] Their vision can be restored by transplanting the Mangekyō Sharingan of an Uchiha with strong blood ties — ideally a sibling — thus awakening the so-called Eternal Mangekyō Sharingan (永遠の万華鏡写輪眼, Eien no Mangekyō Sharingan).[10] Unlike with other transplants, this second evolution will allow the user to retain their original techniques. Although these eyes merge the designs of the two Uchiha's Mangekyō Sharingan, they're still the eyes of the previous owner and thus react to certain techniques that are aimed at the original owner's Mangekyō Sharingan. Also, they no longer suffer any negative side-effects from using them, even reducing chakra-draining to an unnoticeably minimal level. According to Madara, the Eternal Mangekyō Sharingan is proof an Uchiha has continued to push forward despite experiencing great losses.[11]

Itachi Uchiha awakened his Mangekyō Sharingan after witnessing the suicide of his best friend, Shisui Uchiha, shortly before the Uchiha Clan Downfall.[8] With his left Mangekyō he can use Tsukuyomi, an extremely powerful genjutsu that distorts the victim's perception of time. With his right Mangekyō he can use Amaterasu, creating inextinguishable black flames at the user's focal point. Since he awakened both his Mangekyō, he can use Susanoo. Because both Tsukuyomi and Amaterasu use vast amounts of chakra, combined with his terminal illness, multiple use of the Mangekyō's abilities in a short period of time is particularly debilitating for Itachi, such that after using it three times in one day, he was required to deactivate even his normal Sharingan to conserve energy.[12] Some time after Itachi's death, desiring the power to kill Naruto, Sasuke Uchiha had Itachi's eyes transplanted into him.

Obito Uchiha awakened his Mangekyō Sharingan after the death of Rin Nohara during the Third Shinobi World War; Obito himself only had his right eye at the time, but the event caused his Mangekyō to simultaneously awaken in Kakashi Hatake, who wielded Obito's left eye.[13] Both eyes wield Kamui, able to teleport targets to and from Kamui's Dimension, though in different manners. The right eye is able to use close-range Kamui, teleporting the user and/or those they're in contact with. By teleporting only parts of their body there, they can in effect seamlessly pass through other matter. The left eye is able to use long-range Kamui, creating a barrier around a target that teleports them, also able to produce an attraction force to draw other targets close enough in.[14] The left eye can also target the user themselves for complete teleporting.[15] During the Fourth Shinobi World War, it was discovered that each eye is impervious to the others' Kamui.

Madara Uchiha steals Kakashi's eye in order to pursue Obito to Kamui's dimension. There, he exchanges the eye for Obito's Rinnegan, returning both eyes to their original owner, who was currently possessed by Black Zetsu. During this brief period, Black Zetsu also gained access to both Sharingan powers. After Obito was freed from Black Zetsu's control, he uses them in combination effectively thereafter to retrieve Sasuke from Kaguya Ōtsutsuki's distant dimension. But soon afterwards, both of his eyes are destroyed when he is killed by Kaguya Ōtsutsuki's All-Killing Ash Bones. His spirit briefly returns to the living plane and inhabits Kakashi, manifesting both Mangekyōs with their respective abilities through Kakashi and, by extension, Susanoo.

Towards the end of his life, Madara was able to evolve his eyes into Rinnegan, which he transplanted to Nagato when Nagato was a child without anybody ever knowing. For the Fourth Shinobi World War, Obito wielded Madara's left Rinnegan as wielding both would have been too strenuous. Eventually both eyes found their way back to Madara after he was revived.

Izuna Uchiha awakened his Mangekyō Sharingan shortly after Madara did.[16] It's not known what the individual abilities of each of his eyes were. Before he died, Izuna entrusted his eyes to Madara in order to restore his vision and thus protect the Uchiha from extinction.[17] Despite Izuna giving the eyes willingly, Madara is popularly believed to have taken the eyes against Izuna's will.[16]

Sasuke Uchiha awakened his Mangekyō Sharingan after killing his older brother, Itachi Uchiha, and learning the truth behind his actions. With either eye,[18][19] Sasuke can cast Amaterasu, as well as shape and extinguish them. Because he awakened both of his Mangekyō, he can use Susanoo. The straight tomoe of his Mangekyō Sharingan grant him fluidity in his movements when fighting. Sasuke is initially reluctant to transplant Itachi's eyes and gain the Eternal Mangekyō Sharingan, claiming that his views were different from Itachi's. Later, he decided he needs the increase of strength in order to kill Naruto Uzumaki, along with the severe deterioration of his eyesight from overuse, Sasuke accepted Itachi's eyes transplant.

After acquiring the half of Hagoromo Ōtsutsuki's chakra, Sasuke's left eye evolved further, into a Rinnegan, which Sasuke is evidently unable to deactivate. This eye was destroyed by Boruto Uzumaki while being controlled by Momoshiki Ōtsutsuki.

Shisui Uchiha awakened his Mangekyō Sharingan after he "allowed his friend and rival to die". With each of his eyes he could use Kotoamatsukami, a powerful genjutsu that manipulates a target's thoughts so perfectly and absolutely that no one completely, including the target, would have the slightest idea that they were being controlled. However, this technique can't be used with the same eye again until after a period of time.[8] In the anime, awakening the Mangekyō Sharingan in both eyes allowed him to use Susanoo.

When Shisui attempted to use Kotoamatsukami in order to avert the Uchiha Clan Downfall, his right Mangekyō was stolen by Danzō Shimura, who felt Shisui's plan was futile and wished to protect the village in his own manner. Fearful that Danzō would take his other eye too, Shisui entrusted it to his best friend, Itachi Uchiha, and begged him to use it to save Konoha.[20] Danzō transplants the eye he took into himself and uses it over the years to manipulate others to his way of thinking, using the chakra of Hashirama Senju to reduce its recharge time. Danzō destroys the eye before his death so that nobody else could have it.[21] Itachi transplanted the eye he was given into a crow that he planned to use to re-ally his brother, Sasuke, with Konoha.[22] He used it on himself instead when he is reincarnated in order to break free of Kabuto Yakushi's control. Itachi incinerates the crow afterwards so that nobody else could have the eye.

In the anime, Fugaku Uchiha had awakened his Mangekyō Sharingan after witnessing a sacrifice of his dear friend during the Third Shinobi World War. Although, not much is known about his Mangekyō, Fugaku was confident it was strong enough to control the Nine-Tails.[27]

In the anime, Hagoromo awakened this power after risking his brother Hamura's life to save him from Kaguya's control; however, the design of his Mangekyō Sharingan is unknown because his eyes evolved into the Rinnegan at the same time. While the individual techniques his eyes had are unknown, he was able to create a uniquely massive Complete Body — Susanoo, which was roughly the size of the Ten-Tails.[28] 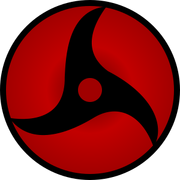