watch 01:30
'Naruto' Profile: Mangekyo Sharingan
Do you like this video?
Play Sound

The Mangekyō Sharingan is acquired through the death of the person closest to the Sharingan user. To expedite this occurrence, Uchiha throughout history have killed their closest friends in order to meet this criteria,[3] though how Kakashi gained his Mangekyō Sharingan has yet to be explained. To obtain the Mangekyō Sharingan, one must feel the emotion of losing a friend or family, as merely killing them or watching them die will not activate it.

Over time, use of the Mangekyō Sharingan's techniques deteriorates the user's eyesight to the point of blindness. Only by taking and transplanting the eyes of another Uchiha clan member can the vision be restored, a process that results in the creation of an "Eternal" Mangekyō Sharingan (永遠の万華鏡写輪眼, Eien no Mangekyō Sharingan). The tighter the blood ties are between the "donor" and the receiver, the better it is for compatibility, siblings for example. Not only does this process permanently restore one's eyesight, with the exception of use of Izanagi, but it also gives the person greater power. The eternal Mangekyō Sharingan also seems to change form from the original, with what appears to be a fusion of the current owners Mangekyō with the previous owners.

Itachi Uchiha gained the Mangekyō Sharingan by watching his best friend, Shisui die. With the Mangekyō Sharingan, Itachi was able to use at least three powerful techniques. With his "left Mangekyō" he could use Tsukuyomi, an extremely powerful genjutsu that allowed him to torture opponents for what seemed like days in a matter of seconds. With his "right Mangekyō" he could use Amaterasu, a ninjutsu which creates virtually-inextinguishable black flames at the user's focal point that continue to burn until the target is reduced to ash. The last of these techniques was Susanoo, which allowed Itachi to summon a massive ethereal warrior. This entity fights on behalf of Itachi and shields him from most attacks. According to Zetsu, when it is combined with the Yata Mirror and Sword of Totsuka it essentially made Itachi invincible. Itachi's Susanoo has three forms which it goes through; a incomplete skeletal form, a complete warrior-like form and a final form that resembles a yamabushi.

Use of the Mangekyō Sharingan put a great strain on Itachi's body and would quickly deplete his chakra reserves, to the point that after using it three times in a day he deactivated his normal Sharingan.[4] During his battle with Sasuke, having resolved himself to dying at the hands of his brother, pushed past this limitation and used his Mangekyō Sharingan more than three times as well as other techniques. A clone containing 30% of his chakra couldn't use it once. He lied to Sasuke that he wanted to take his eyes in order to escape these side-effects. After Itachi's death, Sasuke, at first, refuses to take his eyes, but eventually does so to escape the same side-effects and obtain an "eternal" Mangekyō Sharingan.

Kakashi Hatake developed his own Mangekyō Sharingan during the time-skip. How he developed this is still unclear. With his Mangekyō Sharingan, Kakashi can use a space–time ninjutsu called Kamui to send a target to another dimension. The attack requires considerable effort to aim with precision, leaving Kakashi's chakra significantly drained; considering that Kakashi is a non-Uchiha, the chakra drain is more significant to him than the other users of the Mangekyō Sharingan. When he first used the technique, he collapses after using it three times in a single day. However, after much practice with his Mangekyō, he could use it twice in quick succession, without showing immediate chakra drain and fatigue, to counter Sasuke Uchiha's Susanoo arrows.

Madara Uchiha was the first Uchiha to awaken the Mangekyō Sharingan. He eventually grew blind from overusing it, and only by taking his younger brother, Izuna's, eyes did he regain his sight. This also gave him an "eternal" Mangekyō Sharingan that gave him great power. His Eternal Mangekyō Sharingan looks like a combination of both his first Mangekyō and Izuna's Mangekyō.

Madara, posing as Tobi, has been shown using a space—time ninjutsu which makes him nearly invulnerable. He can also teleport himself or others to another location. It is unclear if either ability is because of his Mangekyō Sharingan however. While it is unknown what other (if any) Mangekyō techniques he may have, Madara has demonstrated detailed knowledge and understanding for other Mangekyō techniques as well.

Izuna Uchiha acquired his Mangekyō Sharingan soon after Madara did. Madara later took Izuna's eyes to regain his lost vision. According to Madara, Izuna willingly gave up his eyes for the clan's sake, however Itachi implied that Madara took them by force.

Sasuke Uchiha awakened his Mangekyō Sharingan after learning the truth about his brother, Itachi. In his grief over the knowledge that Itachi was not the villain he imagined him to be, coupled with Sasuke's role in Itachi's death, he awakens his Mangekyō Sharingan. Unlike other Sharingan, which have a black design and red background, Sasuke's Mangekyō is the first one that is shown to have a red design and a black background.

Sasuke has been shown using the same Mangekyō Sharingan abilities as Itachi. With his "right Mangekyō" he can use Tsukuyomi to break a target's will and paralyse them.[5] Danzō Shimura stated that Sasuke's version is not capable of altering the victim's perception of time, and thus is vastly inferior.[6] With his "left Mangekyō" he can use Amaterasu. It has been implied that his skill with Amaterasu surpasses Itachi's, as he is able to apply Shape Transformation to the flames, creating the Blaze Release, and even extinguish them. Sasuke has displayed the ability to use Susanoo, which he can even partially manifest to fit the situation, such as using a ribcage for defence or manifesting only an arm to interact with his surroundings. Sasuke's Susanoo develops in stages during various battles; he first starts using an incomplete version against the Fourth Raikage, develops a version capable of firing arrows while fighting with Danzō, and later forms a version almost identical to Itachi's during his battle with Kakashi.

Due to having a larger chakra reserve than his elder brother, Sasuke could use the Mangekyō Sharingan techniques more than three times a day. While Itachi was critically exhausted after using Tsukuyomi and Amaterasu once each, and then Susanoo as a last resort technique that ultimately led to his death, Sasuke could use Susanoo several times a day, on top of using the Amaterasu and Tsukuyomi along with some other chakra-consuming techniques like the Chidori. Regardless, like Itachi, using the Mangekyō Sharingan puts a great strain on Sasuke's body and eyes. When his eyesight is reduced to a heavy blur at best, Sasuke has Itachi's eyes transplanted to restore his vision. His "Eternal" Mangekyō has yet to be seen, but he claims he can feel Itachi's power flowing through him.

Shisui Uchiha, one of most celebrated Uchiha in history acquired his Mangekyō Sharingan at some point in time through unknown means. This dōjutsu granted him the ability to manipulate an opponent without them having the slightest idea that they were being controlled. It's only apparent drawback was the fact that it could not be used in succession and took a great deal of time to regenerate without aides. A highly coveted ability, Shisui's right eye was stolen by Danzō Shimura while he was still alive. Shisui entrusted his left eye to Itachi Uchiha and told him to protect the village. He then made it appear as though he had crushed his own eyes and erased his existence, though it was though that he was drowned by Itachi in the Naka River.

Madara's "Eternal" Mangekyō Sharingan
Add a photo to this gallery 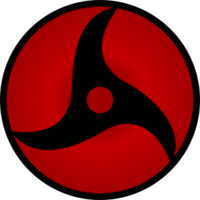