Along with many women and children in Rōran, her husband was kidnapped by Mukade to work to assemble his puppet army.

Masako has medium length brown hair that extended on each side of her face and her eyes are brown. She also wears a blue headband.

She and the others kidnapped Sāra in an effort to have her release all the men that were forcefully put to labour by Mukade. When Naruto rushed in to save Sāra, she revealed to him and Sāra their problem. Later, when Sāra frees the men that were working, she is reunited with her husband. She and her husband follow Sarai to help Sāra open the gate to escape to safety. 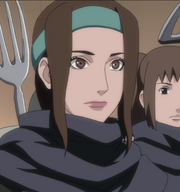