Matsuri (マツリ, Matsuri) is a genin from Sunagakure. In the anime, she is part of a team alongside Yukata and Mikoshi.

In the manga, Matsuri is shown to possess above average strength, being able to carelessly backhand Naruto, knocking him to the ground.[8] In the anime, she learned to use the jōhyō, a weapon mainly used to keep the enemy away with the short dart attached to a long rope, which she can also use offensively. She can likewise use it defensively to block a barrage of needles. Her skill with this weapon enabled her to force Shira, a powerful taijutsu user, to unleash his Seven Heavens Breathing Method to win a fight against her.[9]

She was also chosen to fight in the Fourth Division of the Allied Shinobi Forces, although still being a genin. Matsuri appears to have some skill in Wind Release techniques, having joined other Wind Release users to battle the reincarnated Third Raikage. However, Temari states she isn't a long-distance user.[4]

While she wasn't débuted into Part II in the manga, in the anime she was introduced in Part I. She was a student of Suna's new ninja academy. At the beginning of the weapon-handling lesson, Matsuri asked if weapons are just dangerous. While the class and the teachers pondered the question, Gaara replied suddenly with, "Your weapon is like…" and made Matsuri think that Gaara was trying to tell her something. Therefore she was the only person out of the entire class brave enough to choose Gaara to be her teacher. Gaara, sensing her hesitation and inhibitions, taught her how to use a jōhyō, but she was fearful of it and other weapons because she had witnessed her parents' murders in the past. Gaara tried to tell her that weapons can be used to protect comrades, but Matsuri didn't understand him at first.

Later, the Four Celestial Symbols Men kidnapped Matsuri, because of her importance to Gaara, trying to lure him out, capture him, and steal the One-Tailed Shukaku's chakra stored within him. Gaara, his siblings, and the Konoha 11 (excluding Tenten) came to her aid, and fought her captors. After being freed, she saved Naruto from a fatal attack from Seimei using her jōhyō, after finally realising that weapons can be used to protect comrades. After Seimei's defeat, she returned to Suna with Gaara, Kankurō, and Temari. But before she left, she asked Shikamaru to tell Naruto that he had made her understand what Gaara had been trying to tell her, and that she would continue to train as Gaara's student.

Two years later, Konohagakure and Sunagakure decided to host a joint Chūnin Exams. Matsuri joined the exams with Mikoshi and Yukata as her team-mates, and went to Konohagakure where the first exam would be held. Once entering the exams, Matsuri and her team-mates were randomly split into different rooms to take the written test. On a monitor, Shikamaru Nara explained that everyone only needs to answer one question on the test, but their team's combined score must equal exactly 100 points to pass.[10] After time is up, Shikamaru revealed a bonus question. She, like her team-mates, left the question blank, and ultimately her team passed the first round. However, a preliminary round had to be held to lessen the many participants there were which involved a race to Suna where only the first 30 teams to arrive at the destination would qualify for the second phase.[11]

Ultimately, her team were among the first 30 teams to make it. During dinner, when some shinobi tried to stop Burami from leaking his sweat on the food, they knocked over all the food in the process, angering her and other shinobi. Kiba states it was unintentional, but when he comments on Suna's shinobi awareness skills, she attacks him, beginning the fight that commenced between the genin in the room. The next day, the second exam proctor, Temari, announced the start of the second round taken place within Demon Desert.[12] Later, knowing they were running out of time to pass the exams, Mikoshi suggested they go intercept an enemy team already attempting to complete the exam with both scrolls and take the needed scroll. Along the way, they were caught in a massive sandstorm. Ultimately, Mikoshi falls into quicksand. While Matsuri was able to catch him initially, the whole team ended up falling in. Fortunately, she and her team are saved by Fū. After they regained consciousness, Fū offered them her scroll, saying she no longer needed it. Matsuri and her team, however, declined, following Gaara's example of persevering through struggles.[13]

Afterwards, Yukata and her team were attacked by Hōichi, who captures them. As the genin screamed, Gaara heard and returned to rescue them. After they were freed, Hōichi subdued Gaara with chakra chains that began extracting the tailed beast within him. Gaara told the genin to retreat and leave this to him. Despite his orders, the genin instead chose to get help. Part way, Yukata collapsed and it was decided that she stay behind with Mikoshi while Matsuri went on.[14] Ultimately, she was found by Team Guy. Desperate to save the Kazekage, she offered them her scroll in exchange for their help. Neji Hyūga however decided to help without compensation.

After showing Team Guy to Gaara's location, Fū's team-mates arrived, and it is revealed their team-mate is captured by the same captor of Gaara. Everyone then decides to work together to save their comrades. Matsuri later expressed her relief at finding Gaara unharmed. With the crisis averted, she and the others began laughing at Fū's continued efforts to make friends.[15]

Later, as the exam was nearly over and her team had yet to find a matching set of scrolls, Matsuri decided instead of find Shira, a fellow Suna-nin who like her was a student and supporter of Gaara with the desire to fight him. Upon finding him and making her intention known, he agreed. Ultimately, Matsuri lost, but took her defeat in stride. Their two respective teams then went to the main building to wait for the second exam's conclusion. Ultimately, the Chūnin Exams were ended early before starting the finals due to controversy happening in the second exam. Instead, it was decided by Gaara that a report on each participant would be sent to their respective village leader for them to decide if they would be promoted.[9]

In the anime, Matsuri is seen alongside Yukata and a few other Sunagakure shinobi, gushing over Gaara after he unites the troops with his speech.[16] Later, she is seen with Temari, Shikamaru, Chōji, and Yukata discussing about the topic of kekkei tōta. During the first night of the war, she is seen with Yukata, lending towels to Gaara, telling him that he must conserve his strength. Wanting to show kindness to the older kage, Gaara tells them to give them to Ōnoki before him. They did not recognise him at first, which irritated the Tsuchikage, and were surprised when he told them who he was.[6]

Matsuri was last seen when Madara Uchiha arrived alongside Mū on the battlefield.[17] It is unknown if she survived the following confrontation and the final attack that wiped out most of the Fourth Division. 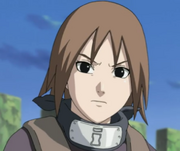