Mebuki Haruno (春野メブキ, Haruno Mebuki) is a kunoichi from Konohagakure. She is also a member of the Allied Mothers Force.

In the anime, after learning that her daughter was to be taught by Kakashi Hatake, Mebuki and her husband were visited by Kakashi and the Third Hokage, inviting them for tea.[1]

Mebuki seems to be a kind and caring woman, seen from her concern over her daughter's then-confused state. In contrast to her light-hearted husband, she is much more serious which causes constant banter between the couple as sometimes Mebuki believes her husband Kizashi tends to take things too lightly all the time.

Mebuki is a fair-skinned woman with shoulder-length, blonde hair with a single bang which falls down into her face. She also has green eyes and wears a white qipao dress with three red circular designs at the bottom of the front of her dress as well as the back. Underneath the dress, she wears pink ¾-length pants along with brown sandals. In the anime, when Sakura was a child, Mebuki wore a red qipao dress similar to what her daughter would wear as a genin.

Mebuki's alternate-world self was seen wearing the standard Konoha-nin attire complete with a flak jacket. She did not, however, wear the village's forehead protector.

In the anime, it is shown that Mebuki is adept at using taijutsu, as seen when she was able to defeat a sumo wrestler with a single kick. She can also fight using unorthodox weapons such as a frying pan.[2]

After coming home from a sale across town with her husband, Mebuki found Ino Yamanaka and a seemingly confused Sakura at their doorstep. Seeing the familiar faces, Sakura was initially shocked and confused but later ran off in tears much to everyone else's confusion. When Kizashi gave her back the necklace she had lost and produced one similar to it from around his neck, Sakura tearfully hugged the two, confusing them even more. Despite this, her parents depart, leaving her with Ino, and telling their daughter to come home whenever she was ready.

With the majority of the shinobi away from the village, Ebisu gathers the women and children of Konoha where he discusses their current situation. When the Sumo Wrestlers attack the village, she, and the other mothers drove them off and watched on as Konohamaru defeated them with a Rasengan.[2]

Within the alternate world's history, Mebuki and Kizashi are long deceased when the Sakura of that world was a child. The last time they saw their daughter was before they went off to protect the village. As they left, Kizashi gave Sakura his necklace while Mebuki smiled warmly at her daughter.

In the real world, she had an argument with Sakura, causing Sakura to leave the house. At the end of the movie, she, along with Kizashi, find Sakura with Naruto and gives her a hug.

Though she did not originate from the manga, Mebuki's character and design was created by Masashi Kishimoto himself, due to being personally involved in the story planning of Road to Ninja: Naruto the Movie. Kishimoto noted that he always wanted to write them into the main series but could never find the correct time to do so. He also noted that the constant banter between the two was also something that he had intended for the pair. 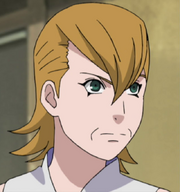