Mecha-Naruto (メカナルト, Meka-Naruto) was a mechanised replica of Naruto Uzumaki that appears in the anime-exclusive episodes and Naruto Shippūden: Ultimate Ninja Storm Revolution.

In the anime, Orochimaru is responsible for Mecha-Naruto's creation. He was designed — based on the Demonic Statue of the Outer Path — as a means to capture Kurama and interfere with the plans of Akatsuki.

Mecha-Naruto was shown originally to be savage, mindlessly attacking everything in its path. While initially having no loyalty, after Nagato repaired and reprogrammed it, Mecha-Naruto became committed to capturing Kurama for Akatsuki. It was relentless in its pursuit of Kurama, destroying everything that got in its way. Despite this programming, Itachi secretly installed an extra programming: if Naruto was to voice his devotion to saving Sasuke from his anger, Mecha-Naruto would side with Naruto. After this programming activated, Mecha-Naruto became driven to help Naruto in battle, willingly sacrificing itself to protect Naruto's village.

Overall, Mecha-Naruto looked similar to Naruto with bolts all over its body holding it together. Its mechanical headband could change when it wishes to various words and phrases.

Mecha-Naruto had vastly enhanced physical strength and was capable of easily picking up and tossing aside Orochimaru, one of the legendary Sannin, as well as effortlessly lift up Mecha-Kurama. It was also incredibly fast as it was able to overtake even the speed of Neji's Eight Trigrams Palms Revolving Heaven. By coming within a certain distance of Naruto Uzumaki, Mecha-Naruto could absorb the Nine-Tails' chakra regardless of countermeasures to keep the tailed beast chakra contained. It could then use this chakra to enhance its own abilities. Neji Hyūga also noted that Mecha-Naruto is in possession of an Eight Trigrams Seal meant to contain Kurama.

Mecha-Naruto was vastly skilled in taijutsu and was able to defeat several Konohagakure shinobi, including taijutsu specialists like Rock Lee and Neji Hyūga, with ease.

Mecha-Naruto, as a machine, could manipulate its body in a variety of manners. It could launch its fists and used them as grappling hooks. It could fire lasers, from its eyes, capable of demolishing Orochimaru's entire laboratory and a good portion of Konohagakure. It was also capable of launching a tremendous volley of missiles from its mechanised chest plates. Additionally, Mecha-Naruto could transform its body into a plane-like form, allowing it to fly at high speeds, and its fingers into machine gun-like extensions. Mecha-Naruto was equipped with a variety of scanners and which allowed it to differentiate between targets. When endangered, it could detach parts of its body to avoid damage, such as its head.

In addition to its plane-like form, Mecha-Naruto could also transform its body into a vehicle mode. While in this mode, its head could produce multiple blades which can then easily slice through large trees. It could also launch these blades as a shuriken. In this mode, it could also produce various weapons, such as large mallets and and drills to combat its opponents. Mecha-Naruto can equip itself to Naruto's body, allowing the two of them to fly to Konohagakure.

Main article: Mecha-Kurama After gathering a sufficient amount of the Nine-Tails' chakra from Naruto, Mecha-Naruto could assume a three-tailed form of its own, granting it a tremendous burst of strength and speed. By using all of the tailed beast chakra inside of it at once, it could create a Nine-Tails Chakra Bomb capable of destroying Mecha-Nine-Tails. Like a jinchūriki, should Mecha-Naruto lose all of its tailed beast chakra, it would die.

In an underground lair, Orochimaru and Kabuto use the power of an ongoing thunderstorm to complete a top-secret project meant to capture the Nine-Tails. Kabuto warns Orochimaru that the creation is quickly going out of control, but Orochimaru ignores him resulting in the mechanised creation to go berserk and destroy the laboratory and escape. It is discovered the next day by Akatsuki and brought to Pain who modified the the mechanised creation with the King of Hell. The Akatsuki leader then commands Itachi Uchiha to go with the Mecha-Naruto to capture the Nine-Tails. Mecha-Naruto later appeared with Itachi overlooking Konohagakure and is commanded to capture Naruto.

Launching an attack on the village, the cloaked Mecha-Naruto quickly overwhelmed the surrounding villagers, including multiple members of the Konoha 11. Naruto arrived shortly thereafter and immediately engages Mecha-Naruto with a multitude of shadow clones, which the mechanised shinobi easily dispatches. During the confrontation, Naruto's tailed beast chakra begins to involuntarily leak out as Mecha-Naruto attempted to take the tailed beast within him. After an intervention by Kakashi and Yamato, Mecha-Naruto engaged on a rampage throughout the village to hunt down and capture Naruto.

Later, Mecha-Naruto spotted Naruto escaping the village and transformed into a plane-like form in order to give chase. It was quickly intercepted by Shino Aburame who stopped its missile with his kikaichū. This resulted in the missile breaking apart into a smaller cluster, easily defeating Shino. Continuing the chase, it was next confronted by Shikamaru who tried in vain to to bind it with shadows only to fail and be defeated as well. Pushing the group into the woods, Mecha-Naruto's next opponent was Kiba Inuzuka, Akamaru, and Chōji Akimichi, all three of which it easily dealt with in its new vehicle mode.

After the palanquin carrying Naruto crashes, Neji stepped up and launched a successful defense against Mecha-Naruto, though the robot's speed quickly overwhelmed Neji, defeating him as well. When even Neji failed, Kakashi took it upon himself to confront Mecha-Naruto, unveiling his Sharingan in the process. However, Mecha-Naruto defeated him with a simple barrage of missile, leaving Naruto alone to be captured at last. As the mechanised shinobi began to overcome Naruto, it was briefly interrupted by the arrival of Gaara, who nearly defeated Mecha-Naruto prior to being distracted by the arrival of Deidara. With Gaara's depature, Orochimaru suddenly appeared to resume custody of his creation.

Orochimaru quickly seized control of Mecha-Naruto and proceeded to attempt to take the Nine-Tails only to be interrupted by the arrival of Jiraiya who summons Gamabunta. Orochimaru easily defeats Jiraiya and the summon and returns to pursuing Naruto with Mecha-Naruto. In desperation, Naruto engaged Mecha-Naruto and initially loses before Sasuke's name brings the robot over to his side, due to a genjutsu placed on it by Itachi Uchiha. Mecha-Naruto then returned Naruto his Nine-Tails chakra. To Orochimaru's horror, Mecha-Naruto turned on him, cutting him in two, forcing Orochimaru to summon Mecha-Nine-Tails to Konohagakure.

In the game, Tsunade states Mecha-Naruto was created by a "certain someone" as a weapon of destruction to rule the world. Mecha-Naruto eventually went berserk and killed its creator. Mecha-Naruto refers to its creator as "Professor". After that, it reveals that it lost its memory because an incomplete "Mental Stone" that is inside of it. Mecha-Naruto seems to be a smart and strategic fighter. It dislikes and mocks Naruto for looking like it and "stealing" its name. It thinks that Hinata Hyūga has a beautiful heart and listens to whatever she says. Mecha-Naruto has a crush on her and calls her "Miss Hinata" (ヒナタさん, Hinata-san), and it is jealous of Naruto because she prefers him instead of it. During the course of the game, Mecha-Naruto is able to exchange bodies with the real Naruto as a way to be accepted by everyone in the village, since it - as a robot - scared people because the way it looks. Later on after Naruto saves it, it comes to actually like Naruto but still thinks of him as its rival.

Mecha-Naruto's other self, Nine-Tails Mode, is the result of Mecha-Naruto regaining its Mental Stone after the Ninja World Tournament. In contrast to its counterpart, Nine-Tails Mode is destructive and shows great hatred towards Mecha-Naruto for "sealing him away". In mechanised variations, Mecha-Naruto possesses most of Naruto and Kurama's abilities, such as the Rocket Rasengan and a mechanical variant of the Tailed Beast Ball. Additionally, it can also shoot rays with its "eyes", after targeting the opponent. It can also merge itself with a huge mechanism to form Mecha-Kurama. It is able to switch minds with its opponents. It can make up to three clones of himself that explode when they are touched. It is also well versed in taijutsu, using jets to make its punches and kicks even more powerful. 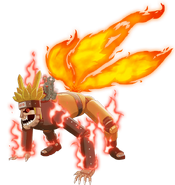 Mecha-Naruto in its three tailed form. 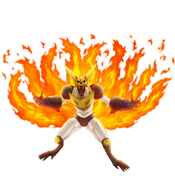 Mecha-Kurama.
Add a photo to this gallery