Miina (ミィナ, Miina) is a young citizen of the Tonika Village.

Miina appears to be a sensitive young child and a bit shy. Showing great affection for her sensei, Dokku, and becoming upset when her brother, Leo, stole the picture she drew. Others seemingly take note of this trait as well, with Dokku playing on her feelings for him to get her to co-operate and Leo shielding her eyes from the sight of a dead body in the ruins of their village. She can also be very brave and utterly trusts Dokku, willingly jumping out of her window to be caught by him despite her young age and the immense height, after only a little hesitation.

She appears to be very kind, offering the lonely Leo a hand to complete the row of their new family and shows great love towards the rest of her new family. After the traumatic massacre, Miina briefly became mute. Miina also reacted negatively to Shiseru after she slapped her but eventually forgave her.

Miina is a small girl, with short shoulder length hair with bangs. She has glossy red hair that she wears in a little ponytail on the right side of her head. She has fair skin and pink/reddish eyes. She wore sleeveless pink pyjamas during the massacre of her village. She later took to wearing Dokku's sleeveless brown jacket after he wrapped it around her. Her hair turns to black after losing her connection with the Saezuri.

Miina appears to be clairvoyant, as she is able to discern any information about events, objects, and people. She has used her ability to sense the evil within others, such as discovering that her grandfather was no longer in control of himself after being reincarnated, by seeing a vision of him as a skeleton, and sensing that Naruto Uzumaki had ingested clone snakes. In addition to this, she has the ability to purge and cure someone of their impurities, as seen when she forced these snakes out of Naruto's body. She is similarly able to peer into and influence another's subconscious, shown after she helped Naruto restore his control over the Nine-Tails.

Miina also appears able to see visions of the future, as she imagined Naruto holding her in his Nine-Tails Chakra Mode, despite he himself not yet knowing of the form at the time.

Shortly before the attack on their village, Miina was drawing a picture of Dokku. After fighting with Leo, who had stolen the picture, their grandfather stops them. When the attack began, the two wandered outside where a militia member told them to go back inside and hide. The pair hid under their bed until smoke started to rise from the floor below them. Before the two could be burnt alive however, they were saved by Dokku, who convinced Miina to jump down to him before rescuing Leo as well. Leaving them on the outskirts of the village, he tells them to go to Hachō Village if he doesn't return. Waiting until daylight, the pair start out. Stopping along the way because of Miina's wounded feet, the two are about ready to give up when Dokku finds them again along with several other survivors. Miina runs crying to Dokku and the two hug each other relieved about the other's well-being.

Arrived in Hachō Village, the group of survivors could rest at Shiseru's house, who knows Dokku from earlier days. At one point, she, Sora and Dokku went shopping. After hearing Faz's lamenting that things were better when he lived at home with his mother, Leo shouts that his mother is gone now, forcing Faz to almost cry. The group is interrupted by Miina's melody on a wooden sticcado. When they arrived at Shiseru's home, Dokku mistakes Naruto and Sakura with enemies and tells everyone to flee. After trying to run over a fragile bridge, Dokku and Miina almost died due the bridge breaking under their feet. They are, however, rescued by Naruto. After an apology, Naruto and Miina are about to shake hands, but Miina imagined a snake coming out of Naruto's sleeve and hugs Dokku scared. The group cooked and ate together and took a bath afterwards. She is later seen sleeping peacefully with the other four.

During the night, she has a nightmare about Naruto and runs crying to Dokku, clinging to him. The next day, the group went to the beach to train, and Miina has a vision about Naruto. She looks sad when Sora, Lando and Faz start to mourn over their lost families. She is however happy as the rest when Naruto notices that there are people who take care of them, referring to Shiseru and Dokku. She offers her brother to be a part of their row while going back home. Arrived, Miina has once again a vision of Naruto being covered with black snakes and tries panic-fuelled to drive them out of Naruto. Shiseru slaps her in the face because she mistook Miina's actions as an attempt to drive out Naruto, and not the snakes nobody else could see. Shocked and hurt, Miina starts crying and runs upstairs.

As Disonasu appears with the Village Head of Tonika Village, she hesitates to hug him and starts to become suspicious of his behaviour, forcing her to pull Leo away from him. She is shocked as the rest when it is uncovered that her grandfather was in fact reincarnated. As the group flees the battlefield, Miina can see the snakes inside Naruto, who lies before her in pain, and tries again to drive them out. She continues even after accidentally being hit by Naruto, and somehow manages it forcing Naruto to throw up the snakes. She is shocked as the rest when the snakes form a clone of Naruto in his four-tailed Version 2 form.

Reinforcements arrive from Konohagakure, giving Dokku and Shiseru enough time to bring the children to safety. Miina, however, refuses help from Shiseru by hitting her hand away and glaring hatefully at her. After Kabuto and his forces retreat, Shiseru brings them home, where they sit stunned for several hours, until Faz breaks the silence by starting to cry about Dokku, who was kidnapped by Kabuto. Miina and the others also start crying, until Leo calms down and encourages them to save Dokku by themselves. After taking the two remaining sounds required to activate the Saezuri to the ruins of Tonika Village, the children were greeted by Kabuto and Disonasu, who were holding Dokku captive. Using the seven sounds, Disonasu then activated the Saezuri, prompting Miina to hum in tune with its activation sound pattern, as the Ama no Hoko was raised from the ground and began releasing its power.

As the Konoha-nin engage Kabuto's reincarnated shinobi, they flee the battlefield alongside Shiseru. During their escape, they nearly got hit by lightning caused by the Ama no Hoko, forcing them to go back since Dokku states that he could stop it as a former Tonika Village Guard. As they bid farewell, Shiseru apologises to Miina and tells her to survive and live alongside the other children, which causes Miina to forgive her.

Miina and the others cry as their new parents approach the Saezuri, but as she sees that Naruto lost control over Kurama's chakra, she runs towards him. With her unknown ability, she manages to save Naruto from Kurama's influence. After Naruto gained control over himself once again, Miina and the others beg Naruto to save Shiseru, who falls down a cliff at the moment. After Naruto saved her and defeated his clone, Miina is glad to see that the seal on his stomach is once again tightened and happily hugs him with the rest of the children. 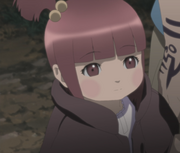