Art of the Valentine

The Mind Body Switch Technique is the signature technique of the Yamanaka clan.

The user converts their consciousness to spiritual energy, which they send at a target. Their consciousness moves slowly towards the target and travels in a straight line. If the user misses their target, it will take several minutes for their consciousness to find its way back to their own body. To prevent this from happening, the Mind Body Switch should only be used against targets that are stationary or that are restrained. When their consciousness does successfully make it to the target, the user supplants the target's mind and takes total control of their body.[2] In the anime, certain inorganic creatures, such as Akuta, are immune to it.[3]

The Mind Body Switch is ideal for intelligence-gathering, and in fact that's why it was originally created;[1] the target's body can be used to explore locations that the user can't enter and read documents that the user can't access.[4] Users can take advantage of the target's physical abilities, such as a bird's flight to better recon an area.[5] Users can also perform their own jutsu while possessing another, notably their sensory skills.[6] While possessing another's body, users can communicate with their targets.[7] Ordinarily, the Mind Body Switch lasts until the user chooses to release it. Targets with strong wills can force users from their body, something that becomes easier to do if the user is low on chakra.[8]

While a user is possessing a target, their own body is left inert. This isn't necessarily an issue in one-on-one encounters, but when facing multiple opponents this leaves their body vulnerable to attack. Furthermore, any damage the possessed body receives is done to their original body as well.[9] It is for this reason that Yamanaka are so often teamed with members of the Akimichi and Nara clans; the Akimichi keeps opponents at a distance, and Nara can use their shadow to manipulate the Yamanaka's body.[7] If the Mind Body Switch is used on an ally for whatever reason, the ally's consciousness can be transferred to the user's body so that it won't be defenceless.[6] 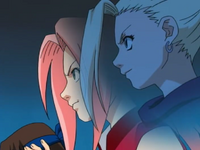 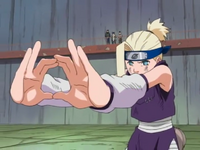