She is quite optimistic, free spirited and very confident. She has been described as being spoiled and determined.[1] In Part II, she has become a lot more like Sakura, shown most prominently when Konohamaru Sarutobi performed his Sexy: Girl on Girl Technique. While Sakura Haruno became infuriated, before she had the chance, Moegi punched him saying that it was ridiculous to create a technique as useless as that, more so than performing it in front of a woman.[4] She frequently has to correct Konohamaru for his perverted behaviour, though she genuinely cares for him. During Pain's assault on Konoha, she showed the utmost bravery, seen when she saved a boy, and even willingly threw herself between him and Pain's summon.

In Part I, Moegi, like the rest of the members of the Konohamaru Ninja Squad, wore goggles just like Naruto did when he was an academy student. She has orange hair tied up, with red elastics, into two very large pigtails. She also has a perpetual blush. In Part I, she wears a red tank-top over a pink t-shirt layered at the bottom; her pants are grey and she wears the traditional ninja sandals. In Part II, she still has her pigtails but wears a Konohagakure forehead protector. Her outfit is a sleeveless purple vest over a violet t-shirt. Moegi also has on a layered skirt with mid thigh boots.

Several years later Moegi has reached adulthood. She wears her large pigtails down and no longer wears a Konohagakure forehead protecter. She has bangs that come down and frames her face. She wears a sleeveless pink shirt with a red ribbon on her neck. She also has a black bracelet on her left wrist and small ring earrings.

In Boruto: Naruto Next Generations, Moegi wears a dark sleeveless jumpsuit that comes down to the knees and a light vest over. She also uses her Konoha forehead protector around her neck, a dark bracelet on each wrist and high-heeled sandals. Her eyes also appear more blue in colour. Her signature pigtails now hang down and she also outgrew her perpetual blush.

As a genin, she was strong enough to punch Konohamaru several metres away and was fast enough to save Sōta from one of Pain's giant centipedes, despite being much further away from him than the summoning was.[4][5] As an adult she had advanced to the rank of jōnin, being capable of easily evading and countering Sarada Uchiha's while using her Sharingan.[6]

While of no practical use, as an Academy student, Moegi could perform a cooperative version of the Sexy Technique alongside Konohamaru and Udon.[7] As an adult, she developed a more efficient array of skills. She possessed sensory abilities and can use the Penetration Technique (看破の術, Kanpa no Jutsu).[3]

Moegi is capable of utilising both Earth and Water Release nature transformations. With the former, she can create a strong defensive wall to stop an avalanche of rocks from afar,[8] and with the latter, she can unleash a barrage of water bullets.[6] By combining the two elements, she can use Wood Release to perform the Wood Release: Verdure Technique (木遁・緑色の術, Mokuton: Ryokushoku no Jutsu) and Wood Release: Vegetation Barrier (木遁・草木結界, Mokuton: Sōmoku Kekkai).[3]

She was seen with Konohamaru, Udon Ise and Naruto Uzumaki before the start Chūnin Exams. She was kidnapped by an unknown ninja — Iruka in disguise to test Naruto — but she was ultimately saved. Later, she meets Temari and Kankurō on bad terms. In the anime, just before the second phase of the Chūnin Exams commenced, she, Konohamaru, and Udon interviewed the participating genin.[9]

During the Oto-Suna invasion, she is seen with Konohamaru and Udon as they are with other civilians being guided to safety.

In the anime, she, Konohamaru and Udon are led by Naruto on a mission against other Academy teams.

About two years after Naruto left the village to train with Jiraiya, Konoha decided to host an early Chūnin Exam alongside Sunagakure. While she and her friends began fantasising about becoming chūnin themselves, Shikamaru reminded them that they hadn't even become genin yet. Though dissapointed about what they heard, they were worried about Naruto being left out so Konohamaru stooped to disguising himself as him but he was quickly caught by Neji Hyūga's Byakugan. Neji explained that Naruto would return when he's ready as he dreams of becoming Hokage, something she and her friends accepted.[10]

Moegi, now a genin, appears with the rest of Team Ebisu at the start of Part II, having returned from a mission of finding a lost cat in time to greet Naruto when he returned to the village. She is later seen with the rest of her squad when Tsunade walks in saying she is giving them an S-rank mission by mistake.

In the anime, Moegi appears again when Konohamaru was demonstrating his Sexy: Girl on Girl Technique. Moegi beats him up for creating such a perverted and seemingly useless technique, causing him to fly far away with her punch making her similar to Sakura.[4] In the manga, Sakura is the one to punch Konohamaru.

In the anime, it is shown that Moegi is present during Pain's Assault. She is seen with Udon eating dango when she suddenly notices an explosion. Afterwards, she meets with her teammates discussing what they should do about the invasion and how they could evacuate the villagers. During a flashback from the Paradise Life on a Boat arc, it is revealed that during the invasion, she got separated from the rest of her team, and saved a young boy from one of the Pain's giant centipedes.

In the anime, Moegi was seen working on the "Konoha Hero Newspaper" with Konohamaru, wondering where Naruto was for their interview. When Naruto returns to the village, he says to Moegi that she and Konohamaru will have to interview him next time, much to her disappointment.

Main article: Paradise Life on a Boat In the anime, Moegi along with Konohamaru and Udon observe how the residents of Konoha are preparing for war, so they decide to also help them. Konohamaru works hard, doing Moegi tells you not to overdo it and it is just a Genin and you should do different activities during the war. Then, turning to Sakura who first makes the move the boxes, and then be upset with them because they took too lightly the war. Moegi agree with Sakura's decision, Shikamaru then speaks, but get nothing.

Later, Moegi accompanies Konohamaru to speak with Tsunade, but not getting anything, watching the three boys approaching Temari escorted by Kotetsu and Izumo, and hid in the bushes. So Moegi and Udon run where he was alarmed Shikamaru to say Konohamaru was in trouble. Moegi goes with Shikamaru and Udon when Konohamaru was about to use his Rasengan against Temari. Shikamaru and diverts the attack hits the ground. Moegi go running to Konohamaru to see if she was okay, and seeing his attitude, she hits him a slap. Moegi begins to narrate when she saved a child who was in trouble during Pain's invasion of Konoha. Then she starts to cry, saying that Konohamaru should change their attitude, acting as if he wanted the war and should should focus on helping grandparents and children of the village. Finally, in the words of his companions, Konohamaru promises to protect the village and says he will one day defeat Naruto.

Main article: Kaguya Ōtsutsuki Strikes After the Infinite Tsukuyomi was cast, Moegi along with everyone within Konoha was captured by the Ten-Tails roots. Ultimately, she and the rest of the world were freed from the genjutsu by Naruto and Sasuke, after they ended the war. She was later seen attending the mass funeral held in Konoha.

Main article: Konoha Hiden: The Perfect Day for a Wedding Moegi appears in this anime arc.

In the anime, ten years after the Fourth Shinobi World War, Moegi attended the Academy's entrance ceremony alongside other teachers, during which she was left mortified when Boruto Uzumaki crashed a train into the Hokage Rock.

During a class, Moegi evaluated students in an obstacle course along Shino and Konohamaru, and failed them for being unable to complete it with all three members within the time limit. She discussed the students' improvements with the two, and considered Iwabee and Boruto to be of interest. She stopped Konohamaru from bragging about the Hokage when conversation shifted from Boruto to Naruto.

Main article: Naruto Uzumaki!! (chapter 700) Moegi and Udon alerted the Hokage that his son was playing a prank again, this time painting the faces of the Hokage Rock and disrupting the arrangement of the upcoming Kage Summit.

In the anime, after becoming the leader of Team 10, the Byakuya Gang began gaining support from several villagers in Konoha, during which the villagers began acting out against companies accused of corrupt actions. Moegi joined her fellow ninja in working to pacify the situation. Ultimately, it was discovered that several of the protesters were under genjutsu. Meogi helped in dispelling the genjutsu. This, along with Naruto's speech, was able to peacefully end the riots. Sometime later, Moegi alongside Konohamaru, Udon, Shino Aburame and Hanabi Hyūga discussed whether or not they should allow their students to compete in the upcoming Chūnin Exams.

Main article: Versus Momoshiki Arc As the Chūnin Exams were nearing, Moegi decided to give her team entrance forms, believing they were ready to take the test.

In the anime, when the lead actors of a popular TV drama, Tomaru and Ashina received a death threat if they continued filming their show, Team 10 was assigned to protect the actors alongside Team 7. Moegi and her team were assigned to watch Tomaru. Later during filming, a masked Ame-nin attacked the set. After the assailant escaped, Konohamaru and Moegi investigated events, determining that either the assailant thoroughly researched the place from how seamlessly he got through security or he had an inside informant.

Later, the masked attacker managed to capture Tomaru. A ransom was left that demanded 20 million ryō and for Ashina to be the one to deliver it. During the exchange, as Konohamaru already captured the attacker and disguised himself as the Ame-nin, Ashina was revealed to be the mastermind behind the assaults as she desperately wanted to rekindle her fame as an actress. In a last blind effort to keep her fame by burying the truth, she attempted to blow up the area. While Konohomaru stopped her from using them, the explosive tags went off, causing a landslide, which Moegi saved the bystanders from with an Earth-Style Wall. Soon afterwards Ashina was arrested.

In the anime, when Chōchō tried asking Moegi why all the jōnin of the village were gathering, she brushed the question off. After Mitsuki's apparent betrayal of Konohakagure, the village was put on lockdown. Despite this, Boruto and Sarada decided to sneak out to find Mitsuki. Team 10 was assigned to find and bring back the two genin. The following day, they managed to intercept them. As the two refused to come back peacefully, they created a distraction and then attempted a decoy with Boruto's shadow clones. This succeeded in splitting up Team Moegi between the jōnin and her students. Moegi quickly subdued her targets, which were the decoy shadow clones. On the way back to her team, she was intercepted by a cloaked assailant. As she continued battling him, he suddenly retreated. Moegi quickly realised that he was a diversion. When reaching her student's last location, she found a note simply saying "Sorry". Realising that her students decided to help Boruto and Sarada, Moegi was left fuming.

During Naruto's flashback to the members of the village when he was gathering natural energy to enter Sage Mode, Moegi can been seen amongst the villagers.

Moegi Kazamatsuri is a playable character in the following video games: 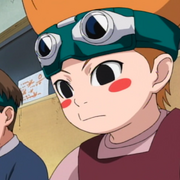 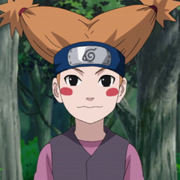