Naruto disqualifies Boruto from the Chūnin Exams because of his use of the Kote. Naruto says they'll have a talk later, causing Boruto to lash out at him, asking if he'll have the time, and saying that if he had actually taught him, things would not have come to this point. Katasuke jumps in and tries to advertise the Kote. Kinshiki lands on the arena, and punches the floor, severely damaging the structure. Temari, Sakura and Gaara begin protecting the audience. Gaara tells Shinki not to try fighting the opponent. Kankurō pulls people away from falling debris with his chakra threads. While Naruto instructs Boruto to leave, Momoshiki drops in and kicks him away.

Sasuke swoops in to save Sarada, while Mitsuki protects a child. Sasuke and Kinshiki exchange insults. Momoshiki pays no attention to Boruto, who tries attacking him with a Fire Release from his Kote. Momoshiki absorbs it, and Boruto tries attacking him with more jutsu from his Kote, all of which are also absorbed. Momoshiki moves in to attack Boruto, but Naruto interferes, taking him away. From afar, Shikamaru paralyses Momoshiki and Kinshiki with his Shadow Imitation Technique. Momoshiki absorbs it as well. Sasuke informs Naruto who they are, and that the contents of Kaguya's scroll was a warning about them, and their intention of acquiring the chakra fruit. Naruto admonishes them from attacking innocent people when he's the one they want. Momoshiki berates them as lesser beings, and ingests chakra pills, and creates a massive attack with the several jutsu he's absorbed. Feeling responsible for having empowered Momoshiki, Boruto creates a shadow clone to protect Sarada. Momoshiki throws an attack their way, but Naruto blocks it by manifesting Kurama's head out of chakra, as well as creating shadow clones to protect those still in the stadium. Sasuke lends Naruto his chakra. Momoshiki throws his full attack at the stadium. Naruto asks Sasuke to protect the children. Naruto prepares to go full out on Momoshiki. 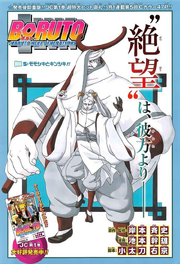