Under the moonlight, the user can manifest multiple target's shadows as tangible clones. While mute and void of personality or specific characteristics, they are exact physical copies of the target, able to use all the same raw might, techniques and abilities. At the same time, they can manipulate their form into other shapes, including morphing their arms into spears. Uniquely, they do not have a separate source of chakra, but rather draw their chakra from the target they were spawned from, effectively making the target tire twice as fast.

As they depend on moonlight, their strength varies with the lunar cycle, being strongest under the light of a full moon. The clones cannot exist within another light source; a searchlight will disperse them if exposed for too long. The clones will, therefore, avoid any other source of light by instinct. 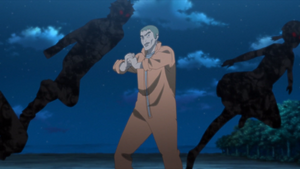