Mozuku has dark coloured hair that is concealed by his forehead protector which he wears like a bandanna. He also wears glasses and the standard outfit of the Torture and Interrogation Force which consists of a grey suit with pockets and lapels.

Not much has been seen in the way of Mozuku's abilities but he is skilled enough to aid Inoichi in delving into the minds of the enemy in order to retrieve potentially valuable information.

He acts as one of the proctors during the written portion of the Chūnin Exams, watching out for signs of cheating. He later fetches Anko Mitarashi when a team of Kusagakure ninja is found dead.

In the anime, Mozuku accompanied Iwashi Tatami, Tonbo Tobitake, Shikamaru Nara, and Shizune to take back the Land of Vegetables from the Janin's control.

Later in the anime, Mozuku was sent along with most of the other Konoha shinobi to advert a possible attack on the village. It was later revealed that the whole plot was conducted by Gennō.

In the anime, he, Anko and Iwashi are seen on a mission shortly before Anko senses Orochimaru's death.[2]

In the anime, Mozuku, along with Tonbo Tobitake and Shimon Hijiri, facilitated in Inoichi Yamanaka's Psycho Mind Transmission of Yūdachi. When Pain's assault on Konoha started, they helped to distract the Animal Path in order to give Inoichi and Shizune a chance to analyse what they had learned.

Mozuku appears on the battlefield when the Allied Shinobi Forces arrive to help Naruto, Killer B, Kakashi and Guy.[3]

During Naruto's flashback to the members of the village when he was gathering natural energy to enter Sage Mode, Mozuku can been seen amongst the villagers. 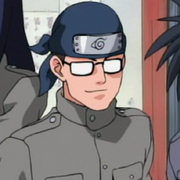