Mud Release (泥遁, Deiton) is a nature transformation kekkei genkai, a combination of water and earth. Because these same natures are used to create Wood Release, and because Wood Release is so famous, few people have ever heard of Mud Release, to the point that Hidan initially believes its very existence is a lie.

In addition to the persecution experienced by most kekkei genkai users, Mud Release users are stuck with a stigma of being dirty and unclean because their ability tends to leave their hands constantly caked with mud.

Ameyuki was the only known practitioner of Mud Release. Shortly before he died, he deposited a large quantity of mud in the Valley of Lies. The mud eventually hardened somewhat into a clay that was ideal for Hanasaki ceramics. 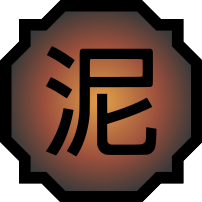