This man was a priest of a burnt village that Jiraiya met during his journey to find his disciple. Years later, his body was used by Nagato to channel the power of the Naraka Path in Nagato's Six Paths of Pain.

While as a priest he emphasised prayer to his followers. He seemed to be a calm, level-headed individual, devout to his religion.

In the anime, while alive, he was a tall, stocky, dark-skinned man with grey hair and eyes. He wore a green poncho-like top and matching coloured pants.

When he became one of Nagato's Six Paths, he gained Nagato's Rinnegan. It also had a spiky mop of orange hair. It had multiple body piercings, such as a circular stud on the bridge of its nose, a diagonal row of studs on each of its cheeks, three spike piercings in each of its ears, and a stud on each of its shoulders near its neck.

During Nagato's fight with Jiraiya, the Naraka Path was summoned with the other Six Paths of Pain to battle him. Ultimately, they were able to defeat and kill Jiraiya.

During the invasion instigated by Nagato to acquire the Nine-Tails' jinchūriki, the Naraka Path was assigned to reconnaissance. Using the King of Hell, it interrogated the shinobi of Konoha. After being confronted by Ebisu whom it easily dispatched, the Path was confronted by a young Konohamaru Sarutobi who was able to land an attack on it, decommissioning it, albeit temporarily. Later when the Deva Path confronted Naruto Uzumaki, the Path took to the rear of their formation where it used to King of Hell statue to rejuvenate the other destroyed Paths before being destroyed itself, by Naruto. 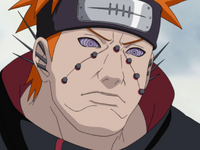 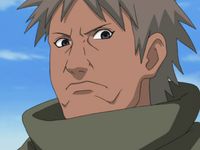