Naruto's Birth (ナルトの出生, Naruto no Shusshō) is volume 53 of the Naruto manga.

Naruto confronts Dark Naruto again. Naruto defeats him by accepting the darkness within himself. After Naruto awakens, Killer B leads him to a cave behind the Falls of Truth. B states that Naruto will fight the Nine-Tails inside the temple-like structure.

Killer B leads Naruto, and Yamato to a secret room inside the temple where the Nine-Tails will be kept in the event that it escapes. As Naruto releases the fox from its seal, B tells Naruto that he needs to use his own chakra to pull out the Nine-Tails' chakra.

The Nine-Tails attacks Naruto with its Tailed Beast Ball, which B blocked using the last bit of the Eight-Tails' power he could manifest within Naruto. Naruto uses this as a distraction to enter Sage Mode and attacks the beast. After a combination of shadow clones and a Rasenshuriken attack on the fox, the Nine-Tails is left vulnerable and Naruto begins to pull out its chakra. The Nine-Tails' hatred begins to seep into the chakra, causing Naruto to become consumed by it. When Naruto is almost overwhelmed by the fox's hatred, Kushina Uzumaki appears.

When Naruto meets his mother, Kushina, in his subconscious, he at first thinks that she is the Nine-Tails' true form, which causes Kushina to angrily clobber Naruto on the head. She apologises to Naruto for her short temper and expresses her hope that Naruto had not inherited that from her, along with her verbal tic. Picking on this, when Naruto realises who Kushina is, he hugs her and cries with joy, his overflowing happiness, neutralising the Nine Tails' hatred. The Nine-Tails is shocked when it recognises Kushina's chakra when she restrains it with her Adamantine Sealing Chains. Naruto wants to know how Kushina and his father met, to which she bashfully tells him. After telling her story, Kushina tells Naruto that she loves him, much to his surprise then happiness, and when she playfully asks Naruto what is the product of the "Yellow Flash" and the "Red Hot-Blooded Habanero", he proudly responds that he is "Konoha's Orange Hokage".

Kushina's words cause Naruto to feel at peace, which makes the Nine-Tails' hatred recede. Naruto makes several shadow clones, and uses several variants of the Rasengan to push the fox back, allowing him to pull out all of its chakra. After obtaining the Nine-Tails' chakra, Naruto's seal takes a new shape, the chakra takes the form of the Sage of Six Paths. Naruto uses the key to close the seal, re-caging the fox. Kushina reveals that she is the previous jinchūriki of the Nine-Tails.

Kushina tells Naruto the history of her clan, and how she became the second Nine-Tails' jinchūriki. After that she begins to explain the events that took place on the day of his birth sixteen years ago. She mentions that the birth took place in secret, as the seal that was keeping the Nine-Tails could possibly break. Soon after Naruto's birth, a masked man killed all the Anbu guarding the cave where he was born. He took Naruto hostage, and told the Fourth Hokage to step away from the jinchūriki, or he would kill the new born.

Tobi breaks through the barrier and kidnaps Naruto Uzumaki. As the Nine-Tails was starting to leak out of Kushina Uzumaki, Tobi demands Minato Namikaze gets away from Kushina or Naruto dies. He's about to strike Naruto but Minato saves him. But Tobi managed to put explosive tag on Naruto. Kushina cries, luckily Naruto and Minato escape, but Tobi escapes with Kushina and releases the Nine-Tails. He tries to kill Kushina through the Nine-Tails but Minato appears and saves her. He then takes her to his house. She tells him they're heading for the village and he must stop them. Minato puts on his cloak, is ready to protect the village and say that he will return. Itachi Uchiha is seen holding Sasuke Uchiha moments before the Nine-Tailed Demon Fox's Attack.

As Tobi moves towards Konoha, several people felt the Nine-Tails' presence, including Kakashi, the Third Hokage, and Itachi. Tobi then summons the fox causing chaos. The Third organises Konoha to battle the fox, while wondering how Kushina's seal broke, despite all the precautions. Minato enters Konoha, on Hokage Rock, causing the Nine-Tails to sense him and fire a Tailed Beast Ball at him. Minato counters the blast with Flying Thunder God: Guiding Thunder sending the blast behind Konoha, alerting the village of his presence. Minato is ambushed by Tobi, who tries to send Minato away. Using the Flying Thunder God Technique Minato quickly escapes, but Tobi follows after him. Realising that Tobi's strength and knowledge is too abnormal, Minato questions if Tobi is truly Madara Uchiha, but states it is impossible, as Madara Uchiha is dead. Tobi speculates on the matter. Minato concludes that with a technique superior to his own and his ability to control the Nine-Tails, Tobi is too dangerous to be left alive. The battle comes down to speed. They charge towards each other, Minato throwing a Flying Thunder God Kunai only to have Tobi phase through it. He then forms a Rasengan. Tobi grabs Minato's shirt, thinking he has won, only to have Minato disappear and reappear over Tobi striking him with the Rasengan.

Minato strikes down Tobi with his Rasengan, then teleports to the masked man and releases the Nine-Tails from his control. Acknowledging his defeat, Tobi retreats to a safe distance from the Fourth, but not before stating he will have another chance at world conquest, and then he too, teleported away. Meanwhile, Minato arrives in Konoha and summons Gamabunta to keep the Nine-Tails still while he prepares to teleport it to a safer location. After relocating to a another place, he is unexpectedly met by Kushina Uzumaki and their newborn, who restrains the Nine-Tails using her Adamantine Sealing Chains. Asking what she is doing here, Kushina responds to him by stating she intends to use the last of her chakra to pull the fox back to her with her so the it will die with her. Minato prepares to use the seal away the fox, telling Kushina he'll conserve her chakra to give her a chance to see Naruto one last time as the death god hovers ominously over him.

Kushina protests the use of the Dead Demon Consuming Seal, asking Minato why he is sacrificing himself so she can meet Naruto for a few minutes when he's older. He convinces her that it's the right thing to do because "he could never substitute for her". The death god grabs the Nine-Tails but seals only half of it. Minato summons Gerotora and gives him the key to the seal he's about to put on Naruto. Kushina gives Naruto a long list of things to do then Minato performs the Eight Trigrams Sealing Style on Naruto. In the present, Kushina apologises to Naruto for not being there, and he tells her he didn't know what a parent's love was like, but he managed. Naruto thanks his parents for making him their son and tells them that his vessel is full of love from the both of them. As Kushina fades away, she thanks him for letting her and Minato be his parents and thanks him for being born to them. 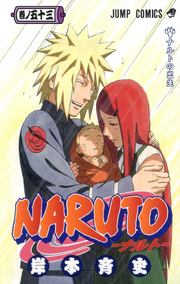